In April, The Walking Dead closed out its season six finale with the debut of Negan (Jeffrey Dean Morgan), the oft-talked about leader of the Saviors – a villainous group that found themselves in opposition with Rick Grimes (Andrew Lincoln) and the people of the Alexandria community. “Last Day on Earth” proved itself controversial for its now infamous cliffhanger, which saw eleven members of “team family” – Rick, Daryl (Norman Reedus), Carl (Chandler Riggs), Michonne (Danai Gurira), Abraham (Michael Cudlitz), Sasha (Sonequa Martin-Green), Glenn (Steven Yeun), Maggie (Lauren Cohan), Rosita (Christian Serratos), Aaron (Ross Marquand), and Eugene (Josh McDermitt) – on their knees and lined up, awaiting judgement from Negan in a twisted game of “eeny, meeny, miney, moe.” The selected victim – unrevealed to the audience – was then bludgeoned to death in a POV shot, leaving fans understandably frustrated with the lack of resolution.

We still have to wait until October to find out who kissed Lucille – Negan’s beloved weapon of choice, a baseball bat enveloped in barbwire – and the season seven Comic Con trailer was sure not to give anxiously awaiting fans any hints as to who survives the deadly lineup. In the meantime, The Walking Dead season six made its way to Blu-ray and DVD today, with a Blu-ray exclusive scene offering an alternate, uncensored version of “Last Day on Earth.” In it, Negan – free from the anti-naughty-words regulations that oppress him even on cable television – has free reign when it comes to usage of the word “f–k” and it’s seemingly countless variations, with the foul-mouthed villain letting loose exactly 23 uses of the “F-bomb” over the course of his ten minute appearance. In creator Robert Kirkman’s ongoing comic book series, Negan frequently lets the “F-word” fly – and while the live-action Negan never ventured beyond “shit” in “Last Day on Earth” as it aired for broadcast, the uncensored scene depicts a fully realized and comic book accurate Negan.

The Walking Dead is no stranger to alternate cuts that are relegated to Blu-ray in lieu of making it to broadcast – the season four Blu-ray offered an uncensored version of the season finale, replacing Rick’s on-air “They’re screwing with the wrong people” with the much-more-appropriate (and comic book accurate) “They’re f–king with the wrong people” – but like an R-rated film that has been neutered in favor of a studio mandated PG-13, the uncensored scene is how this scene is meant to be experienced: unfiltered, unrestrained, and with no regards for things like censorship. (“Pegged” replaces “f–ked” on television airings, and Negan telling you “you’re f–ked” is a lot more effective).  Negan is an intimidating and scary presence no matter what language he is (or isn’t) using, and Jeffrey Dean Morgan’s ten minute performance is enthralling and masterful – this is Negan come to life, even if Morgan isn’t word-for-word utilizing comic book Negan’s F-word-using-finesse.

“You are so gonna regret crossin’ me in a few minutes,” Negan tells a terrified Rick. “F–k yeah, you are,” he continues, looming over the now-submissive leader of an equally defeated crew. This guy is scary, but charismatic – and so damn likable – and as grip-your-goddamn-seat-cushions as the scene is, it’s hard, as a fan of the comics, not to smile when Negan is being Negan, not tethered by the leash that so unfortunately held him back on television airings. Negan is a lot more than his use of the “F-word,” and Morgan’s performance certainly doesn’t suffer from it any in the finale as aired – even if the uncensored scene does make it appear that the censored Negan edges a bit toward being neutered. The line delivery is a bit more gleeful, a bit more relishing in Negan’s imposed superiority, and it makes you wonder if this iteration of the scene was shot first. Not to take away from Morgan’s performance – he gives it 100% in both versions – but the uncensored Negan has an advantage in that he can more fully express himself with a barrage of “f–ks.” Negan’s “beat the holy hell out of one of you” works fine in the show, and the uncensored alternate – “I am gonna beat the holy f–k, f–king, f–kity f–k out of one of you” – could be viewed as boarding on being excessive, or even silly, but it’s delivered so well that, f–k it, it’s fun.

Negan’s potty mouth doesn’t make up for the biggest issue facing the episode, even if you still haven’t come to terms with the aggravating and mood-killing cliffhanger. Forget being restricted from using five of the seven dirty words – this scene was neutered long before it was ever censored for television. Withholding the identity of Negan’s victim halted all the momentum the episode, and that scene in particular, had. Fans were left screaming at their televisions not because a character they cared about died, but were left screaming out of frustration. (Raise your hand if you gave Negan a run for his money in the “f–ks” department when the credits rolled). Had Negan’s “eeny, meeny, miney, moe” concluded with the camera landing on the unlucky victim of the roulette of death, audiences would have been punched in the gut – and it’s that kind of attachment to your characters that makes this such a heartbreaking, powerful moment. What should have been one of the most tragic and upsetting – and memorable – moments of television history, rivaling that of any of Game of Thrones‘ best stomach-turners, was rendered inert and frustratingly incomplete. No doubt audiences will still be emotionally affected come the revelation of the victim (or victims) in October, but it’s hard to get your audience into that mindset after six months away.

“Not f–kin’ cool. You have no f–kin’ idea how not f–kin’ cool that sh-t is,” Negan says, and it’s hard not to feel that way about what could, and should, have been among the entire series’ best episodes. Disappointing cliffhanger aside, “Last Day on Earth” is a well-crafted and engaging episode – it’s just too bad the ending was chopped off and saved for later. With a sticker boasting an “explicit language” warning on the Blu-ray cover, the uncensored Negan scene deserves to be your go-to preference when re-watching season six and “Last Day on Earth” (even if the alternate cut is relegated to the special features disc, Disc 5, instead of on Disc 4 with the last few episodes for season six). If season six didn’t meet your buying and owning standards, the set isn’t worth owning for the Negan scene alone – but even with a season filled with fakeouts, dumpster dives, and blue ball cliffhangers, The Walking Dead season six Blu-ray is worth owning, especially if you’ve collected all seasons thus far. There’s still a lot of life in The Walking Dead, and the addition of Negan and communities like the Hilltop and the Kingdom ensure that there’s a lot of the world of the cannibalistic undead to explore. The Walking Dead complete season six Blu-ray is now in stores, and The Walking Dead returns to AMC on October 23rd. 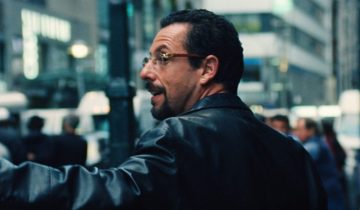