Home›Movies›SAVFF REVIEW — “Portrait of a Lady on Fire”
Movies

SAVFF REVIEW — “Portrait of a Lady on Fire”

I’m not crying, you are

Portrait of a Lady on Fire is written and directed by Céline Sciamma and stars Noémie Merlant, Adèle Haenel, Luàna Bajrami and Valeria Golino. It tells the story of Marianne, who is commissioned to paint the wedding portrait of Héloïse, a young woman who has just left the convent. Because she is a reluctant bride-to-be, Marianne arrives under the guise of companionship, observing Héloïse by day and secretly painting her by firelight at night. We were lucky enough to attend the SCAD Savannah Film Festival and the first movie we caught was Portrait of a Lady on Fire! This film has been gaining a huge amount of buzz since it debuted at the Cannes Film Festival earlier this year and oh boy is it earned. Portrait of a Lady on Fire is a beautiful, sprawling epic romance featuring two fantastic performances from its lead. Film twitter is gonna go nuts.

Céline Sciamma is the mastermind here and by golly does she crush it. Every single frame is brimming with talent and craft here. Sciamma directs with a clear and poignant vision and delivers on every level. She does not hold back and where most directors would build to emotion or build to a shot, Sciamma just puts it on the screen. I’ve never seen such a fearless direction in such a sweet and intimate film. Her script is touching and nuanced. There are so many wonderful sequences and scenes that you lose count. It’s funny, it’s uncomfortable, it’s moving, it’s heartbreaking, and at one point even musical. She is a force to be reckoned with here and she’s never on screen. Although the film does start to feel its length, once it arrives at its finale, you don’t want it to end. She’s certainly made a fan out of me and I cannot wait to see what she does next.

Every single performance is wonderful. Every single one. This cast comes together to deliver one remarkable performance after another. Noémie Merlant and Adèle Haenel quite literally shine as our main characters and paint a romance so tender and touching that I couldn’t help but cry. You’re instantly invested, so much so you don’t realize how much you are until the film is over. Their romance really is the heart of the film and it’s beating in every frame. I have the biggest crush on both of them and hope they both continue to receive praise for their work here. Luàna Bajrami is also a welcome addition to the story and adds a great deal to the narrative. While her character could feel a bit tacked on, Bajrami is able to make herself necessary whenever she is on screen. 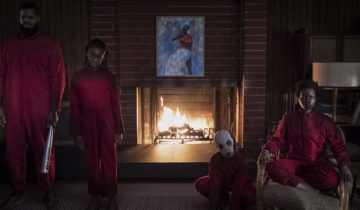