Wish Upon is directed by John R. Leonetti, written by Barbara Marshall, and stars Joey King, Ki Hong Lee, Sydney Park, Elisabeth Rohm, and Ryan Phillippe. It tells the story of Jonathan Shannon, who gives his 17-year-old daughter Clare an old music box that promises to grant its owner seven wishes. Skeptical at first, Clare becomes seduced by its dark powers when her life starts to radically improve with each wish. Everything seems perfect until she realizes that every wish she makes causes the people who are closest to her to die in violent and elaborate ways. Now, I’m not gonna sit here and pretend Wish Upon is the best film of 2017, I won’t even pretend like it’s a great film. I honestly forgot that it came out. But, I got my hands on it so I reviewed it. This was released back in July, which doesn’t seem like so long ago, and has finally found its way to Blu-Ray, so what did I think? Eh. As I said Wish Upon is not a great film, it’s not even a very good one. It’s not offensively bad and pretty forgettable. If you’re looking for some standard horror fun, you’ll find some enjoyment out of it. It’s not too original and pretty standard when it comes to horror. Maybe in different hands, it could have been done much better, but I don’t see why anyone would want to try with this. It’s just another horror film, and that’s not a bad thing, just not a very exciting thing. 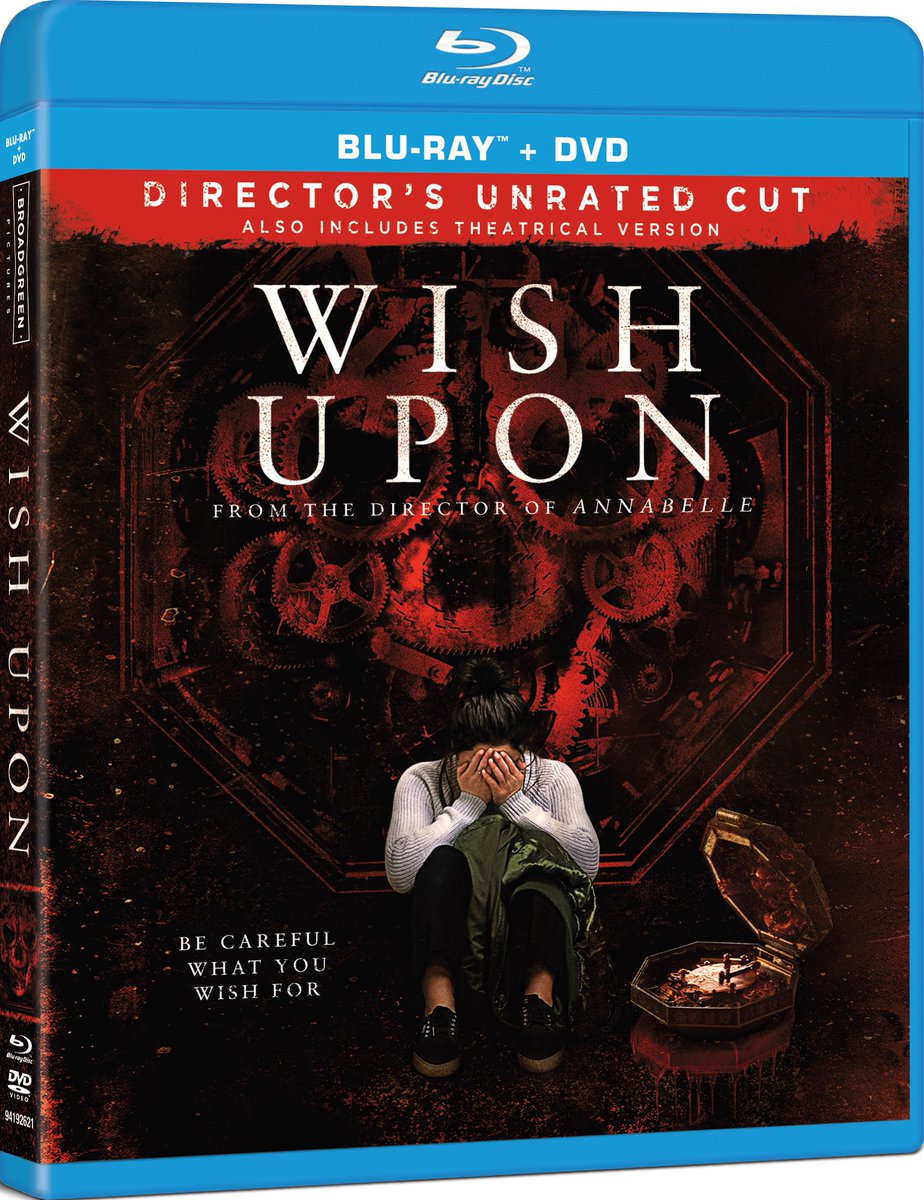 Wish Upon, while a pretty sub-par movie, is a pretty par Blu-Ray. The picture quality is expectedly clear and crisp, which is standard for Blu-Ray releases at this point. Even though the picture quality is good, the cinematography isn’t the best. Not to say it’s not bad, but One Perfect Shot won’t be featuring Wish Upon on their twitter anytime soon. The Blu-Ray does NOT come with a slipcover which rubs me the wrong way, but it has an indented logo which makes up for the lack of a slipcover in my book. My copy did not come with a VOD but I’m sure you could find one if you really wanted to. Visually, I actually think the cover art is pretty cool. If I saw this at the store, I’d at least be interested in it. There are some pretty cool special features on the Blu-Ray, so it outdoes the DVD in that respect.

Wish Upon is presented nice. It’s 1080p UHD 16×9 Widescreen 1:85:1 presentation is obviously better than the lower DVD presentation, and the inclusion of the special features make it a worthwhile Blu-Ray. While I didn’t love the film, the special features were actually pretty cool. The Motion Comics were pretty cool and the Attic Tour was a nice addition. The cast interview and Attic Tour are featured on the DVD, but the Motion Comic and Directing Darkness featurette are just for us Blu-Ray people! I was surprised no commentaries were featured but to each his own. This Blu-Ray release features a super edgy Unrated Directors Cut and while It didn’t shock or unsettle me, I guess some teenagers could be freaked out by it. If blood is too much for your young eyes, the PG-13 theatrical cut is also included so don’t you worry. It’s a bit odd the special features on the Blu-Ray were more memorable than the actual film. Maybe I’m just a snob.

I don’t see why you would need to rush out and pick up Wish Upon on Blu-Ray, certainly not 4K. But hey, it’s only 90 minutes and it could be fun with a group of friends. I’m sorry if I seem unenthused or dismissive, but Wish Upon just wasn’t too terribly remarkable or memorable. Sorry guys.