We Don’t Belong Here is written and directed by Peer Pedersen and stars a surprisingly stacked cast featuring Catherine Keener, Anton Yelchin, Kaitlyn Dever, Maya Rudolph, Riley Keough, Annie Starke, Justin Chatwin, Molly Shannon, and Cary Elwes. It tells the story of the matriarch of a dysfunctional family, who is pushed to her tipping point by the disappearance of her son. With the great cast and this being Anton Yelchin’s last performance, I was very intrigued by this despite the almost non-existent advertising campaign. So how was it? We Don’t Belong Here is a sufficiently intriguing, well-acted thriller that is entertaining enough to warrant watching. It won’t blow your mind and you may not even remember it after a week, but Anton Yelchin’s performance is reason enough to check this one out.

Peer Pedersen is making his directorial debut here and he does a fine job. He is able to craft very unnerving and tense sequences. The structure and overall tone of the film, while at times inconsistent, was very interesting and I could see myself going back and re-watching this to make sure I picked up on everything. With a better script, I could really see him becoming someone akin to Nicolas Winding Refn or even Darren Aronofsky. The general tone of We Don’t Belong Here is hard to pinpoint, but I feel that was by design. I would compare this to something like The Neon Demon or The Lost River, just instead of graphic content we have emotional family drama. I did find myself bored at a few times but the runtime is perfectly short so I only found myself feeling that way for a short time. Pedersen is not the hottest new director, but I would be interested to see what he does next.

Peer Pedersen also penned the script and unfortunately, it could use some work. Often times character motivations didn’t make sense and the story often meandered. He has written a very intriguing family drama while also adding some surprising humor. With a re-write or possibly a different screenwriter, Pedersen could have been able to make something great because the story is inherently intriguing, the execution was just off. We Don’t Belong Here starts off great, it’s just as we move into the second act the momentum slows way down. The entire time you feel the plot is moving towards some big twist or revelation, and while there is something that could be described as a twist, the payoff was ultimately unsatisfying. The script is not bad per-say, just nothing really making it something that needed to be put to film. The characters are well written and there are great scenes, just nothing really exceptional.

As previously mentioned, We Don’t Belong Here has a stacked cast. The obvious stand out here is Anton Yelchin. In his brief screen time, he shines, portraying a complex, deep, and emotional character. We truly lost a great talent at the start of a great career. Maya Rudolph also does a great job, playing a very out of type character. While she does have some comedic moments, this is clearly a dramatic role. Molly Shannon is also a delight in everything ever. The rest of the cast does fine, no one really shines but a few do have promising careers, in particular, Kaitlyn Dever. The acting is one of the best parts of the film, while not being noticeably great, but that is not a flaw. The plot ping pongs between characters so we never really settle on a main character. That being said, Anton is the only part I would call exceptional.

On a technical aspect, We Don’t Belong Here is fine. The editing was at times a bit choppy but there are a few really great shots (take notice of the one below). Nothing is noticeably bad or great, everything is serviceable. The score is actually really great. As a fan of this type of music, I will find myself listening to it while driving. It’s very reminiscent of John Carpenter or even more recently It Follows, while never being as extreme as those two. The technical side can be seen as an allegory for the movie itself, everything it fine and there is some really great stuff sprinkled throughout. There is a lot of potential here and the reason I’m not being as hard on this as something like Ghost In The Shell is I’d like to see this talent flourish. Progress is a thing and I’m able to see that everyone involved can improve. We Don’t Belong Here, you did okay, but I know you could have done better. I’m not mad, but try again and bring me something really great.

So in short, We Don’t Belong Here is nothing special, but it is perfectly passable. It’s not a must-see, but you’ll be happy with what you’ve watched. Some great performances and an intriguing story. 2.5/5 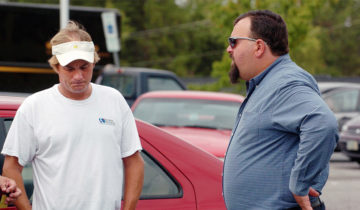