In spite of Casey Affleck’s best efforts and a few suspenseful sequences, Triple 9 is not worth seeing in theaters due to its unremarkable characters, several miscast actors, and a dull final act.

The only likeable and interesting character in Triple 9 is Casey Affleck’s Chris Allen, who is an idealistic police officer that wants to make a difference. While this is a familiar character, Affleck’s performance manages to make Chris’ determination to protect others and his snarky demeanor convincing and engaging. He even delivers the funniest line of the film when he describes his character using two choice expletives.

Without a doubt, the strongest aspect of Triple 9 is the action sequences. Whether a group of criminals is trying to steal something valuable or police officers are engaged in a man hunt, John Hillcoat (“The Road,” “Lawless”) stages each suspenseful action sequence, except for the last, with admirable precision. These tense sequences are aided by Bobby Krlic, Atticus Ross, Leopold Ross, and Claudia Sarne’s energetic score music.

In spite of its strengths, Triple 9 is crippled by Matt Cook’s poorly written screenplay. After all, Cook manages to craft characters so generic that Norman Reedus (“The Walking Dead”), Aaron Paul (“Breaking Bad”), Gal Gadot (“Batman v Superman: Dawn of Justice”), Teresa Palmer (“Warm Bodies”), Woody Harrelson (“True Detective”), Kate Winslet (“Titanic”), Chiwetel Ejifor (“12 Years a Slave”), and Anthony Mackie (“Captain America: Civil War”) are unable to shine in this disappointing crime thriller. Out of all the characters in this film, none of their names or motivations are particularly memorable.

For example, Woody Harrelson portrays Sergeant Detective Jeffrey Allen, a colorful character who snorts coke while busting criminals and behaves erratically. Even though this character is meant to make a comedic and dramatic impact upon the film, Harrelson’s performance is forced and tired. Unfortunately, the other characters are similarly generic and uninteresting.

To make matters worse, Kate Winslet, Chiwetel Ejifor, and Gal Gadot are all horrendously miscast. Kate Winslet portrays Irina Vlaslov with a Russian accent so hokey that it would have been more appropriate in a spy-spoof or older James Bond film. In spite of the superb hair style, costume design, and make-up utilized to make Winslet become Irina, she gives arguably the worst performance of her career. As in Divergent and The Divergent Series: Insurgent, Kate Winslet tries to be menacing by being cold, but only succeeds in making her character a boring, predictable antagonist.

As for Chiwetel Ejifor, he portrays Michael Atwood, the leader of the group of criminals at the center of this film’s plot. Regrettably, Ejifor’s attempts to be firm and intimidating fall flat. His character is motivated by the fact that Irina has his son, but the filmmakers fail to capitalize on this potential emotional hook. The audience knows very little about Michael’s son, which makes it difficult to care about his character arc.

Michael’s lover, Elena, is portrayed by Gal Gadot, whose acting in this film makes her work in Fast Five seem Oscar worthy. To be fair, both Gal Gadot and Teresa Palmer were cast for two shots of the film, in which their buttocks are emphasized. Gadot’s miscasting is, however, more problematic in that her character is supposed to have feelings for Michael, but she fails to convey this convincingly. Ejifor is unable to have any chemistry with Gadot and vice versa. The relationship between Michael and Elena is one of the pivotal emotional hooks that Matt Cook and John Hillcoat failed to execute.

For the first three-fourths of Triple 9, its well-staged action sequences and Casey Affleck’s solid performance make it a so-so film. The best scene of this film occurs when Chris Allen is unwittingly led into a trap by a fellow police officer. If Triple 9 had ended after this thrilling shootout, the final act, which is a rip-off of the final act in Martin Scorsese’s The Departed, would have been averted. The final stand-off between the snitch and Chris Allen is ineptly staged: If the characters behaved rationally, then it would have been finished in a few minutes. Instead, audiences are expected to believe that the snitch and a police officer would not kill each other from point-blank range. Also, the deaths of these generic characters mean nothing.

In other words, Triple 9 is a poorly written heist-thriller that suffers from several miscast actors, and a dull final act.

Are you seeing this film in theaters?

This film is rated R for strong violence and language throughout, drug use and some nudity. 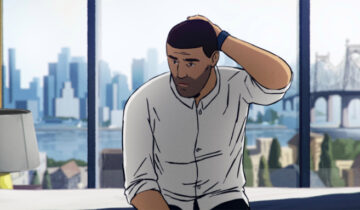