Inspiring and surprisingly fun, “The Walk” is a true story that feels like a storybook fable.

Beloved Director Robert Zemeckis has created a number of amazing films over the years, and he’s done it once again.  Trailers for “The Walk” don’t do it service, hinting at a potentially boring true story that may contain some epic 3d scenes.  Instead we are treated to a wonderful fable, full of fun, humor, and infectious enthusiasm.  Joseph Gordon-Levitt’s portrayal of Philippe Petit seems a bit overdone at first, but we are quickly sucked into his energy and playfulness of the film.

Narrating the entire film, JGL tell’s of Philippe’s performance origins in early 1970s France.  Black and white, with splashes of color, and a wonderful French soundtrack, this opening act establishes who Philippe is, how he meets his friends, and why he is so driving to stretch his wire between New York City’s new Twin Towers.  Once Philippe meets Annie (Charlotte Le Bon), a fellow kindred spirit, the color bleeds back into the film. The next hour of the movie unfolds like a very unconventional heist movie.  Accomplices are gained, plans made, skills honed. Phillippe’s raw talent needed to be refined, his showmanship improved.  To do this he turned to an old master wire-walker, “Papa Rudy”, played with relish by Ben Kingsley. In fact, all of the performances in “The Walk” shine with joy.  It’s a film full of likable characters that are all perfectly cast.

Zemeckis is a rare director who uses special effects to enhance his stories, and not just a gimmick for trailer fodder.  Sure, there are plenty of gratuitous FX shots in “The Walk”, particularly vertigo inducing 3D imagery, but they truly add to the experience and storybook feel.  It’s remarkable just how fun this movie is.  A near constant layer of wry humor is present throughout. Another surprising aspect is how it’s an homage, or love note, to the Twin Towers of the World Trade Center.  Yes, it’s obvious they play a major part in the story, but they are in the background of many shots, and a lot of time is spent discussing how the citizens of NYC feel about these monuments. As JGL utters his final line, and the film slowly fades out on the towers, lit with the golden setting sun, a wave of bittersweet admiration passes of the audience. 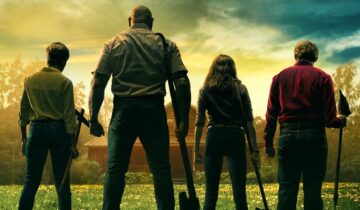