Due to lackluster acting, writing, and directing, The Shallows lives up to its title in the worst way possible. Also, the score music is bombastic.

When the vast majority of a film features one character on their own, the lead performer must give a superb performance to carry said film, a la Tom Hanks in Cast Away, Will Smith in I Am Legend, and Sandra Bullock in Gravity. Unfortunately, the performance from Blake Lively (The Town, Green Lantern) in The Shallows is not engaging. Some of the reasons her performance does not work is due to the director, Jaume Collet-Serra, who prompts her to overact in ever sequence in which she gets hurt. Lively’s Nancy is hurt nearly every time she does anything in the second act. Each time she is hurt, she screams out in pain, which grows tiresome. In the end, Lively simply does not have what it takes to keep the audience invested in this over-extended story nor her character.

The cyclical nature of the events that occur in the middle act prevent The Shallows from being more than a generic shark attack film. Watching a young woman, no matter what she looks like, sit on a rock and wait to make her next move is hardly entertaining at all. Even though this film is refreshingly short, 87 minutes long, the pacing is so poorly handled that it feels more like a two and half hour snooze fest.

Also, screenwriter Anthony Jaswinski (Satanic) makes questionable storytelling decisions throughout. In the first act, Jaswinksi provides Nancy’s character with two young men to talk to and surf with, only to have them offed within minutes of returning to the water. Because these men are not developed enough to be characters, their deaths have no dramatic impact.

Jaswinski’s script tries to have a heart in that Nancy is a young woman recovering from the death of her mother and trying to find her own way. In other words, this film tries to be like Gravity, in which the main character’s suffering is a part of their psychological recovery. Regrettably, the relationship between Nancy, and her father, who is portrayed by Brett Cullen (The Dark Knight Rises, Ghost Rider); and Chloe, who is portrayed by Sedona Legge, is painfully underdeveloped. These characters only share the screen twice, yet audiences are expected to care whether or not Nancy gets back home to her family and moves on from her mother’s death. These puzzling storytelling decisions hinder this film.

Jaume Collet-Serra’s direction is another disappointing aspect of The Shallows. Although Serra directed action sequences capably in Non-Stop and Unknown, his direction of the shark attacks is uninspired. He utilizes several underwater tracking shots in an attempt to create an atmosphere of fear, yet there are a few cheap jump scares that detract from any of the tension he successfully establishes. More importantly, Serra fails to provide any sense of liveliness or urgency to the snail-paced middle act.

Marco Beltrami’s (The Hurt Locker, Scream, Terminator 3: Rise of the Machines, and I, Robot) is one of the worst horror scores in recent memory. This is evident in that the score music during both the horror and dramatic scenes are bombastic. Because the music is over-the-top, it takes away from the tone that Serra wishes to establish in nearly every scene. Even the shark attack score music is equally generic and boisterous.

The Shallows is not a complete waste of time, however, due to a few good scenes. The opening dialogue between Nancy and Carlos (Óscar Jaenada) is well-written and delivered. Because Jaenada’s comedic timing and chemistry with Lively is strong, this scene is by far the film’s best.

While Blake Lively’s performance is not strong enough to carry a 87-minute film, her acting during the scene in which her character films messages for her family is solid. Even though the audience is not given enough development or screentime to care about Nancy’s mom, father, and sister, Lively makes it convincing that she loves all of them.

By far, the most interesting aspect of this film is “Steven Seagull,” a seagull that spends time with Nancy on the same rock. The seagull in this film functions like Wilson in Cast Away, in that Nancy begins talking to and bonding with this animal in order to keep her sanity. Lively makes it convincing that she cares about the well-being of the seagull, which helps make the audience invest in this animal more than the human characters.

The Shallows is mildly entertaining at times, but it is ultimately undone by its lackluster acting, writing, and direction, as well as its bombastic score.

Due to lackluster acting, writing, and directing, "The Shallows" lives up to its title in the worst way possible. Also, the score is bombastic.
2/5

The opening scene is lively and humorous. Steven Seagull is likeable. A few of the shark attacks are suspenseful. 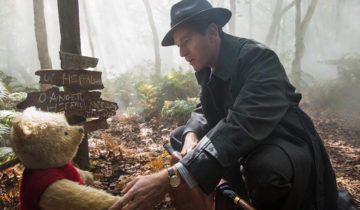