“The Man From U.N.C.L.E.” is the tv-to-film adaptation you didn’t know you needed (I mean…do you?). Despite us already having a prominent spy adaptation tearing up the market, “Mission: Impossible,” Warner Bros. teamed up with the excellent and witty Guy Ritchie (“Snatch” “Lock Stock and Two Smoking Barrels”) to take us back to the cheesy era of the spy genre, and it works pretty well. The characters are fun, the action sequences, for the most part, are exciting, and the character interactions are a blast. However, the writers were a little heavy handed when it came time to writing out the plot/conflicts, and certain things really drag out or are too convoluted to be enjoyed; The run time is just under 2-hours, but it feels like it’s thirty minutes too long.

The cast is both the strongest and weakest part of the film. With an ensemble cast like Hugh Grant, Alicia Vikander, Armie Hammer, Henry Cavill, Elizabeth Debicki and Jared Harris, you’d expect a slew of pretty solid performances. Alas, most of these actors have little to do or no development. Our time is rightfully spent with our two leads, and Hammer and Cavill have some fun chemistry with one another. I was worried that Hammer wouldn’t be able to pull off the Russian accent, but as the film went on it felt more and more like he wasn’t pretending. Cavill pulls off the suave and arrogant sexy spy that can match the best of the James Bond franchise, and even has a few moments that you would think were taken straight from a Bond film. Alicia Vikander has been hitting the big screens in a huge way since turning in a solid performance in the incredible “Ex-Machina,” but is really sidelined here as a piece of eye-candy for more than half her screen time. Debicki, Harris, and Grant could have all easily been recast, and no one would have been the wiser. They were given very little to do, and didn’t have enough screen time to add their unique flare to the roles. There’s always hope for a sequel.

While there are some action sequences, and some really fun banter/quipping between characters, there is also a lot of downtime where the plot is being developed; it’s painfully slow. There are moments in this action/spy/comedy/thriller where you’ll be downright bored, and that’s never a good thing. The editors could have cut out a lot of crap, and trimmed this into a leaner feature more focused on the comedy/action, since the plot isn’t too compelling. However, there are a few moments that are just hilarious as something eventful is happening in the background while our hero(es) is/are doing something relatively mundane in the foreground. Hate to be vague, but I don’t want to ruin these highlights for you.

As a whole you can tell this is a Guy Ritchie film. The character dynamics and interactions are in line with his style of work, and the soundtrack is on point too. Some fun action sequences and hilarious background moments keep this from being totally forgettable, but weak character and plot development will leave you questioning whether or not you want more. Pacing is an obvious issue, despite it being a reasonable run time already, but overall it’s enjoyable. If you’re a fan of the cheesier old school spy flicks, minus the fancy gadgets, then this could be right up your alley. 3.5/5

REVIEW — "The End of the Tour" 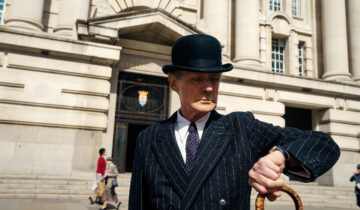