Due to its unconvincing CGI, amateurish action sequences, scattershot narrative, and lackluster performances, The Huntsman Winter’s War is a horrendous prequel and sequel to Snow White and the Huntsman.

Producer Joe Roth, who previously produced Maleficent, Alice in Wonderland, and Snow White and the Huntsman, is unable to make any of the CGI settings and creatures look convincing. Throughout this film, many of the shots of landscapes and castles look animated and surreal. As for the “goblins,” they are essentially monkeys with ram horns. Considering that one of the action scenes feature these goblins, their poorly-rendered CGI is distracting. Because the backgrounds and creatures are composed of unconvincing CGI, this blockbuster looks cheap and gaudy. The fact that The Huntsman Winter’s War features worse CGI than Alex Proyas’ Gods of Egypt is even more baffling when one considers that Snow White and the Huntsman was nominated for an Oscar for its dazzling visual effects (one of that film’s positive aspects).

Although this is a live-action fantasy sequel and prequel, the action sequences are all poorly edited, choreographed and directed. During action sequences, timing is everything. Unfortunately, Conrad Buff IV’s (Terminator 2: Judgment Day, The Last Airbender) editing is too quick, which makes it difficult to follow the action. The action that can be followed is not timed well enough. In other words, many of the shots of characters being stabbed, hit, and or shot with an arrow, are not in tune with the shots preceding it. Therefore, the action sequences are frantic and unsatisfying.

To make matters worse, the fight choreography is repetitive and uninspired. Chris Hemsworth’s The Huntsman utilizes the same strategy and maneuvers in nearly every fight. He is essentially an unstoppable force against all of his foes, which prevents there from being any tension. On the other hand, Jessica Chastain’s Sara seems to dance around and throw her arms and knives about until all of her enemies fall down. 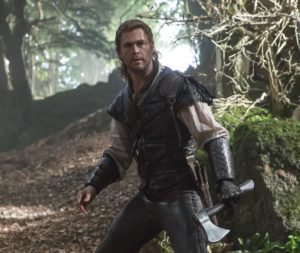 In his directorial debut, Cedric-Nicholas Troyan fails to frame the action effectively. There is only one great action shot in this film, which involves The Huntsman making a ridiculous leap from a mountain onto several rooftops. Other than that, the action is filmed too closely for the audience to take in all that is happening. This also keeps the characters at a distance when the audience should be cheering them on or rooting for them to meet their demise. All of these factors help make the action sequences tedious and dull.

All of these flaws could be forgiven – to some degree – if the story was compelling or interesting in any way. Unfortunately, it is not. According to IMDb, the plot of The Huntsman Winter’s War is: “As a war between rival queen sisters Ravenna and Freya escalates, Eric and fellow warrior Sara, members of the Huntsmen army raised to protect Freya, try to conceal their forbidden love as they combat Ravenna’s wicked intentions.” However, the heavily marketed battle between rival queen sisters Ravenna (Charlize Theron) and Freya (Emily Blunt) leads to a two or three-minute final showdown. Also, Sara and Eric only try to conceal their true love in the first act.

The reason that the IMDb plot synopsis for this film is woefully inaccurate is that The Huntsman Winter’s War suffers from a weak, scattershot narrative. Apparently, Snow White and the Huntsman did not have enough world-building, so the entire first act of this film serves as a prequel. Screenwriters Craig Mazin (The Hangover Part II, Identity Thief) and Evan Spiliotopoulos (Hercules) jump from one narrative to another during the crowded first act. They try to balance an origin story for Freya, the conflict between Ravenna and Freya, the secret love affair between Eric and Sara, and the Ice Queen’s quest to eradicate love. The weight of these plot lines is simply too much for the first act to bear. 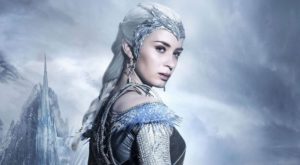 This film would have been much better if the screenwriters had chosen to focus on less plot lines and focused more on character development. One of the most ineffective aspects of this prequel sequel is Freya’s origin story. Audiences are introduced to Freya’s lover through a longing look that they share during a coronation. Within two minutes of screentime, it is revealed that Freya is pregnant with his child. Because this story starts after Freya has fallen in love, the audience is not given the chance to experience her love and passion, nor are they able to feel the weight of her lover’s betrayal. The fact that the murder of her child only elicits indifference from the audience is a consequence of weak character development.

Mazin and Spiliotopoulos do not provide a single surprise. This would be more forgivable if there were not “twists” that were treated as if they should be surprising. To make a “twist” work, the hints must be subtle and well-crafted. The hints at every twist are bluntly delivered through dialogue. In fact, the “hints” at the twists are as subtle as the plethora of dialogue foreshadowing Gwen Stacy’s death in The Amazing Spider-Man 2. Another reason that the failure to make the twists work is significant is that it prevents the audience from reacting in the same manner as the characters. Why should audience members be shocked when they find out what Ravenna did to Freya in the past when the dialogue during the first act already made it obvious?

Even though The Huntsman Winter’s War boasts a talented cast, there is not one decent performance. To be fair, Chris Hemsworth provides more charm and arrogance as Eric/The Huntsman than he did in the original film. That being said, his emotive work and love for Jessica Chastain’s Sara are subpar. Jessica Chastain’s peformance as Sara The Huntsman’s wife, fails to make her more than a tough female heroine caricature.

Even Emily Blunt, who gave excellent performances in Into the Woods, Edge of Tomorrow, and Sicario, is unable to bring anything to her role as Freya. Blunt is simply not fierce enough to be intimidating and her stilted facial expressions make every emotional moment, no matter how pivotal or inconsequential, hollow. Charlize Theron, whose performance as Ravenna was the most dynamic, captivating aspect of Snow White and the Huntsman, seems too bored to care whether her villain is cartoonish and forgettable.

Because this blockbuster’s special effects and action sequences are underwhelming, this is not a mindless fun ride. The narrative is even more scattershot and overstuffed than that of Batman v Superman: Dawn of Justice (which is saying a lot). Also, none of the actors and actresses can make their characters engaging or worth investing in emotionally. With all of this in mind, The Huntsman Winter’s War is the worst blockbuster of 2016 (thus far).

Rating: PG-13 for fantasy action violence and some sensuality.

Are you going to see this in theaters or wait to see it on DVD?

This film boasts a talented cast. 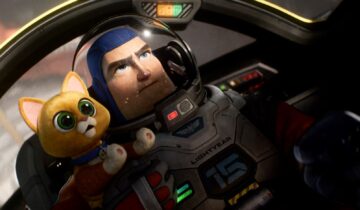