Home›Movies›REVIEW — “The Girl on the Train”
Movies

REVIEW — “The Girl on the Train”

Following the trend of acclaimed novels being adapted to film, “The Girl on the Train” is the next one that is seemingly ripe for the taking. What the hell is this even about? Emily Blunt plays Rachel, a recovering alcoholic who suffers from uncontrollable mental breakdowns and is blacking out at all the worst times. She’s been slowly slipping into this abyss of darkness ever since her ex-husband Tom (Justin Theroux) leaves her for Anna (Rebecca Furguson), for reasons that are slowly explained throughout. To numb herself of the pain and reality, she rides a train to New York every single day, passing by a group of houses near where she used to live. One in particular is close to the tracks, which is the house of Scott (Luke Evans) and Megan (Haley Bennett), who also happens to be the nanny for Tom and Anna. Each and every day, Rachel observes Megan’s seemingly perfect life. She makes up her own stories and narratives for Megan’s life, making it almost a fairy tale of sorts. Until one day, she sees something that she was probably not supposed to see. It slowly unravels and begins to hit closer and closer to home for Rachel.

The film is currently residing at a 51% on Rotten Tomatoes. I can totally understand why, even though I have a fairly firm on opinion on it. A lot of people that I talked to prior to seeing it were expecting a fast-paced, crazy thriller in the same regards of “Gone Girl.” On the way out, most of them were disappointed and I found myself to be the only one defending it. This is by no means on the same level as “Gone Girl,” nor will it be in my list of top ten films of the year, but I was absolutely riveted throughout this film. For anyone expecting a crazy, rapidly paced thriller will be surely disappointed due to how somber and meditative many aspects of this film are. It takes its time to develop its character and flesh our its story. Director Tate Taylor does the tricky job at making its non-linear story work in an engaging way, making the slow-burn aspect genuinely pay off and come wonderfully full circle by the end. I was also impressed by how this isn’t afraid to be a character study in many regards, sometimes even more than it is a straight-up thriller. It’s a study of a woman who is slowly slipping away from her humanity, and whether or not she can trust her instincts and what she “saw” when she hardly feels alive anymore.

The script and direction are certainly worthy of compliments and praise, in regards to how tricky it must have been to adapt an equally engaging book to screen – but the performances here are largely my biggest takeaway. Luke Evans and Justin Theroux do a pretty solid job as the shady men intertwining the lives of these women, and the horror that follows. However, the women in this film are the absolute standouts. Haley Bennet is absolutely fantastic as a women who is overcoming a secretive past by reinventing herself with each town that she moves to. Rebecca Furguson does a nice job at transitioning from her role as the bad-ass in “Mission: Impossible” to a more somber trophy wife in this. Far and away, the best performance in the film is a leading Emily Blunt. She’s always an actress who’s capable of fitting whatever role you place her in; she can do comedy, action, thriller, drama, etc. Anything you need, Blunt can do, and that is proved greatly here. She gives a haunting, fascinating, and heartbreaking performance. She exhibits alcoholism and depression in a really frightening manor, that I haven’t seen exhibited so raw in a mainstream feature in quite sometime. I don’t think that she will be nominated for an Oscar at the end of the year, but if the Oscars were tomorrow, she would be my pick for Best Actress.

While I greatly enjoyed this film, it isn’t without its flaws. I really enjoyed the third act of the film as a whole and found the pay-off to be really satisfying, considering everything that it was building up to. My minor gripe lies within how it transitions from more of a slow-burn tone to something a bit more intense and gnarly/bloody. It felt a bit jarring to me. I didn’t have any issue with the imagery, since it was alluded to from the start and was clearly heading in that direction. I just thought that Tate Taylor could’ve found a slightly more natural transition into the third act that didn’t sneak up so quickly behind you. Even with those minor nitpicks, I can’t recommend this film enough. It comes so satisfyingly full circle and pays off its build-up so nicely. It’s one of the most entertaining films playing in theaters right now, sure to cheer you up from the September slump.. if you’re into psychological thrillers about depressed, manic people. “The Girl on the Train” is as equally of an engaging thriller as it is a heartbreaking, nuanced character study with a tremendous performance from Emily Blunt. 4/5.

GIVEAWAY — "The Legend of Tarzan" Blu-ray

REVIEW — "The Girl On The Train" (Second Opinion) 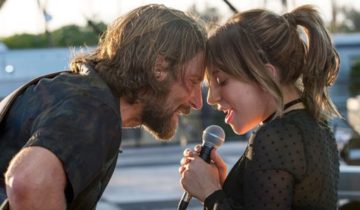