On paper, The 355 sounds like a bonafide hit – a Jason Bourne-esque spy thriller starring acclaimed performers such as Jessica Chastain, Diane Kruger, Penelope Cruz, Fan Bingbing, AND Lupita Nyong’o? It almost seems like a guaranteed hit from the star power alone. And yet, Simon Kinberg’s The 355 is a wildly predictable, choppily edited, and painfully boring affair from the get-go. The film follows five secret agents, from different countries and governments, who all cross paths trying to contain a… hard-drive? Full of government info and typical macguffins you’d expect from the genre. And that’s not to say that you can’t make an entertaining and kick-ass film that follows typical tropes, because I certainly am not above some good, old-fashioned escapism.. but the film forgets to do just about anything else right in the process of being completely generic and predictable.

I don’t necessarily think any of the cast is to blame for this being a slog. While they don’t necessarily have much material to work with or time to develop any sense of genuine chemistry, it does feel like each actress is trying their best to make this material work. Diane Kruger in particular comes in with a certain edge and mystery that made her one of the more compelling screen presences in the film. Lupita Nyong’o, who I’m convinced can never turn in a bad performance, balances being the brainiac of the group and getting some of the best lines. 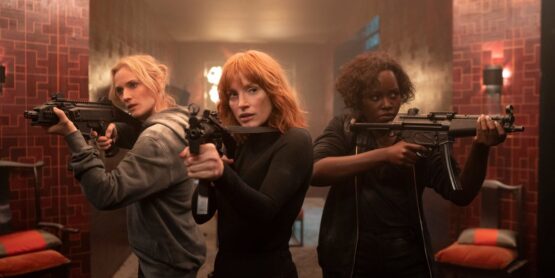 Simon Kinberg, who previously directed the less than spectacular Dark Phoenix back in 2019, seems to be my biggest issue here. It feels like he was going for a Paul Greengrass approach by making the fight sequences scrappy and purposefully claustrophobic to inthrall you in the action. The problem here is that the Jason Bourne movies effectively utilize shaky cam to their benefit, but The 355 feels like it totally misunderstands the style it’s trying to achieve. There is just about only one decent action sequence in this entire film, and even then, I was wishing they’d tone down on the shaky-cam of it all so I could get immersed into the tension.

Is it the worst action film I’ve seen in recent memory? No. The cast, thankfully, are there to elevate it more than the script deserves – but it’s undeniable that this is a largely wasted opportunity full of poor storytelling, inexcusably boring choices and laughably contrived “twists” that are supposed to catch you off guard. Without giving anything away, the film ends with a potential sequel set-up, and I can’t quite imagine a least-appetizing way to tease an audience about characters/actors returning, after just sitting through a 100-minute film that does absolutely nothing interesting with them. If you can turn your brain completely off, it might not be the worst way to spend an afternoon watching it on cable or streaming in the next two or three years.. but it certainly isn’t worth watching in any other scenario.

REVIEW — “The Book of Life”