When Wes Craven sadly passed away in 2015, many fans wondered if another Scream movie would ever be made. After all, why would anyone dare to try and make one without the godfather of horror cinema behind the camera? Nevertheless, it’s been almost exactly ten years since 2011’s Scream 4 and since then, the horror genre has evolved and resurged in ways that I’m sure would be delighting Wes. With all of these changes coming to the genre, it seems prime for another Scream movie – and directors Matt Bettinelli-Olpin and Tyler Gillett are the pair bold enough to take on the mantle behind the camera. So, with all of that being said, how does the new Scream fare in comparison to the rest of the franchise? Beautifully! It’s a worthy addition to the series, and I loved every minute of it.

The film takes place, once again, in Woodsboro where a mysterious new killer takes on the mantle of Ghostface. Sam Carpenter (Melissa Barrera) is brought back to her hometown and into the bloody mix when her younger sister Tara (Jenna Ortega) is attacked by Ghostface. The film balances the mix of bringing in legacy characters like Sidney (Neve Campbell), Dewey (David Arquette), and Gale (Courtney Cox) with a whole new generation of characters – some of which are tied to/descendants of characters from the original movies. In the scheme of making a legacy sequel that simultaneously pulls from the past with inspiration yet tries to do something new, Scream not only pulls off that exact goal but makes fun of those ambitions and the newfound need to make every franchise feel fresh and “elevated” to stand-out amongst the abundance of prequels, sequels, remakes, etc. But at the same time – the film also makes fun of those who are afraid to let their precious franchises evolve and grow from what they hold nostalgia to. What I’m trying to say is, the new Scream takes a jab at not only the horror genre as a whole, but also the state of the entertainment industry at the moment and how fans feel entitled to the content and art they consume. 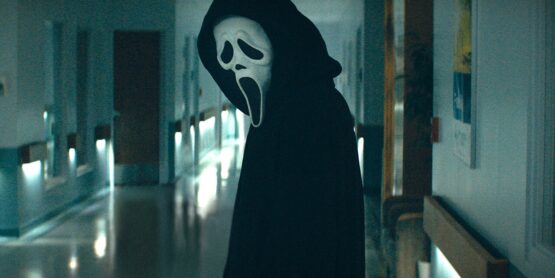 The returning cast is as lovely as ever, with Neve Campbell and Courtney Cox returning as Sidney and Gale to remind audiences why they are two of the most quintessential and bad-ass final girls to ever grace the silver screen. David Arquette possibly gives his best performance as Dewey Riley here, adding a sense of grit and tiredness to his usual charm. He’s still delightful and lovable as ever, but for the first time in a while, you can truly see how worn down he is after all he’s been through with Ghostface. Arquette absolutely chews up this material and owns every second he’s on screen. The new cast here is also great, with Melissa Barrera and Jenna Ortega turning in both bad-ass and wonderful lead performances as the Carpenter sisters. Two other standouts, in a very large ensemble cast, are Jack Quaid as Sam’s dorky but caring boyfriend Richie and Jasmin Savoy Brown as Mindy. They both give wonderful performances here and have so much fun every single second they’re on-screen.

It’s always a good sign when the only complaint you can think of is the fact that you wanted more, and I can say that that’s just about the biggest gripe I have with Scream. While I appreciate the lean precision of the film and I don’t think there was anything missing from the final film, I genuinely could’ve spent even more time reveling in the mystery and getting to know these characters. But even with that small albeit selfish nitpick aside, I was delighted at how sharp the screenplay was and how absolutely brutal the kills are this time around – it truly balances wit and humor with terror and gore brilliantly. And for a Scream film, I’d say that’s just about the most essential thing to get right. It might not be as revolutionary as the original, but I think the team over at Radio Silence did Wes proud and delivered a worthy and insightful sequel that effectively commentates on and revels in the state of the horror genre today.

REVIEW - "A Journal for Jordan"