Because Steve Jobs boasts superb performances, first-rate direction, and a magnificent screenplay, it is a masterpiece.

Steve Jobs stars: Michael Fassbender, Kate Winslet, Jeff Daniels, and Seth Rogen. Surprisingly, Seth Rogen’s portrayal of Steve Wozniak is serious and convincing. For once, Rogen is not a man-child, but the devout friend of a legend that he helped build. Kate Winslet portrays Joanna Hoffman, an assistant that provides Jobs with wise advice for both his career and personal life. Because Jobs was infamously stubborn, nearly any suggestion that Joanna makes leads to an argument. However, the chemistry between Winselt and Fassbender, who portrays Steve Jobs, makes it convincing that they both care about each other in spite of their quirks. Another character that pleads for Jobs to be more reasonable is John Sculley, the father figure of Steve Jobs, who clashes with him over business decisions and the Mac, among other things. Jeff Daniels’ performance makes it convincing that Sculley is both a businessman trying to do what is right for his company and that he deeply cares for Jobs as a person.

As for Michael Fassbender, who is known for his performances in Inglourious Basterds, The X-Men: First Class Trilogy, and 12 Years A Slave, he provides his most compelling performance yet. Not only does Fassbender capture every mannerism of Jobs, from the way he talks, walks, and thinks, but he manages to convey the weight that he bore internally and externally. When a character is as arrogant and headstrong as Jobs, to make the audience care about him, the actor must show his humanity in order to make them relatable and worth caring about. To further aid this, the filmmakers provide an emphasis on Jobs’ relationship with Lisa Brennan, his daughter. Three different actresses portray Lisa at various ages: Mackenzie Moss, Ripley Sobo, and Perla Haney-Jardine, all of which are fantastic. Steve Jobs’ struggle with being a father and caring for his daughter while dealing with his own intimacy issues helps provide this film with a heart. This is amplified by Fassbender’s chemistry with each of the actresses portraying his daughter.

Danny Boyle, the acclaimed director of 127 Hours, 28 Days Later, and Slumdog Millionaire, provides this film with dynamic direction that ensures that this film’s pacing is snappy enough, even though the plot focuses on the various arguments that Jobs has prior to launching three of his products. In lesser hands, this film may have been well acted, but dutifully paced. Boyle’s shot selection heightens each dramatic beat of this film and allows each of the actors to shine.

Steve Jobs would not be the masterpiece that it is without Aaron Sorkin’s magnificent screenplay. Each character, no matter how likeable they are based on their behavior, is given enough charisma and humanity to make them engaging. Every line of dialogue in this screenplay is carefully crafted to either further the plot or character development. Of course, as in Sorkin’s other masterpieces, Moneyball and The Social Network, the spit-fire dialogue makes it so that the audience must pay close attention in order to catch everything that is said. Sorkin also deserves praise for providing great, character-driven humor throughout this film.

With all of this in mind, Steve Jobs is a masterpiece with first-rate acting, direction, and screenwriting. 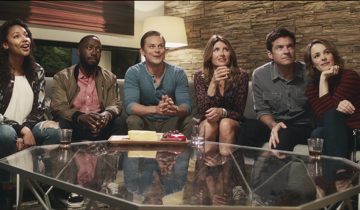