Nothing can match the marvel of the original, but this is by far the best Jurassic movie in 20 years.

When the first “Jurassic Park” came out over 20 years ago, it blew audiences away.  No one had ever seen dinosaurs that life-like on the screen before.  It was also one of Spielberg’s masterpieces, layered with symbolism and visual metaphors.  Two sequels were released, each four years apart, each a dim shadow of the original.  The storylines drifted heavily from Michael Crichton’s source material.  Audiences became jaded.

Fast forward to 2015, back on the original island of Isla Nublar, the Park is now a World that feels very much like the bastard child of Universal Studios and Walt Disney World.  This new improved version of the park has “spared no expense” and has been successful for a number of years.  Unfortunately, their profits are beginning to dwindle.  The incredible has become mundane, people want something, bigger, louder, scarier!  This ironic parallel may be lost on many, but “Jurassic World” seems to revel in it’s sly comparisons between the park goers and audience members.

Its script is difficult to judge as it tends to exist on different planes.  The first hour of exposition, and much of the dialogue is par for the course.  Witty at times, predictable yet enjoyable.  On meta level it repeatedly remarks on how jaded the mass public has become, demanding more and more, almost blaming them for the creation of these monsters.  Whether or not you enjoy “Jurassic World”, it argues that it’s exactly what you’ve been asking for.  The third level is for the nostalgic. This film is riddled with references to the original Jurassic Park, including elements from Crichton’s two books.  For the fans it’s quite a treat. (Look for a “small” cameo of Ian Malcolm in the control room.)  It also has slight nods to a few other classics, such as Hitchcock’s “The Birds.” For the most part, once you accept living dinosaurs, the rest of the movie requires only a mild suspension of disbelief.  The handful of ridiculous developments and cliches are forgiven because the rest of the movie is so much fun!  It’s considerably more logical than the 2014’s ludicrous “Godzilla.”

Director Colin Trevorrow (“Safety Not Guaranteed”) was able to assemble the perfect cast for “JW.”  Fresh off his success in “Guardians of the Galaxy” is Chris Pratt as Owen, a sort of mashup between Steve Irwin, Peter Quill, and a touch of Harrison Ford. Bryce Dallas Howard plays the park manager, and is as easy on the eyes as ever.  She’s a great straight (wo)man against Pratt’s Owen.  Playing an entirely different type of villain from his role in “Daredevil”, Vincent D’Onofrio is “Hoskins”, a military contractor who is behind a large chunk of the investment money the park operates on.  He’s the type of narrow minded military jerk we have been accustomed to seeing in this type of movie.  There are actually two returning characters from the original Park.  First is the DNA scientist, Dr. Henry Wu (BD Wong).  The second character, well, let’s just say she appears at the film’s climax.

Judged relatively, this is a -great- dinosaur disaster movie.  Even if events are predictable, once they actually occur, they are so much fun the audience is giggling with delight.  It won’t win any Oscars, but if you were a fan of the first one, you will surely love this one. 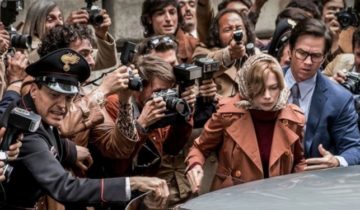 REVIEW — “All the Money in the World”