Despite a few minor plausibility and familiarity issues, David O. Russell’s Joy works thanks to incredible performances from Jennifer Lawrence and Bradley Cooper, sharply-crafted dialogue, and a palpable sense of wonder that is balanced with realistic consequences.

Because Joy’s story is narrated by Mimi, the fact that she is not in every scene is distracting. After all, how would she know what Joy does and says with other people when she is not even there?! While this is a common movie trope, it is still implausible. Another implausible element rears its head during a pivotal scene in which Joy is advised to make a financial deal. When Joy’s ex-husband, Tony Miranne, who lives in her basement at the beginning of the film, gives her better advice regarding patents and business than her own father and his wealthy girlfriend, there is no logical explanation given for this.

In terms of familiarity, the first act of Joy is primarily about the dysfunctional family drama that holds Joy back from pursuing her dreams. While this portion of the film makes the audience root for Joy to break free of her family and succeed, the quirky family drama is reminiscent of but not as effective as that on display in David O. Russell’s The Fighter and Silver Linings Playbook. Part of what prevents Joy from excelling in the first act is Robert De Niro’s portrayal of Rudy Mangano. For the record, the major issue with this is not in De Niro’s performance so much as the fact that it is exhausting to see him as a temperamental, bitter father figure for the umpteenth time. This, along, with the familiar family melodrama, detracts from the pacing of the first act. A few minutes and characters could have been cut to tighten the pacing of this film.

In spite of these minor flaws, Joy excels most when Jennifer Lawrence and Bradley Cooper are on screen. Although Robert De Niro’s work with David O. Russell has declined in quality since Silver Linings Playbook, Lawrence and Cooper continue to provide diverse and stellar performances under his direction. Jennifer Lawrence, who is known for her performances in The Hunger Games Franchise and The X-Men: First Class Trilogy, portrays Joy Mangano with impeccable emotive work. Not only does Lawrence convey the stressed and disillusioned nature of her character initially, but she captures the sense of wonder, determination, and pain that she faces in her pursuit of making and selling the Miracle Mop. Her captivating performance is the anchor that holds this film together even during the first act. Bradley Cooper, who is known for his performances in The Hangover, Guardians of the Galaxy, and Silver Linings Playbook, portrays Neil, the man who Joy most convince to help sell her product on television. Unlike in American Hustle, Cooper’s character does not try to jam a phone into the skull of another character when he is angry. In other words, Neil is more reserved, but Cooper delivers each line in naturally swift manner that emphasizes his character’s quirks and keeps the audience’s attention. As business allies and during their arguments, Lawrence and Cooper’s chemistry is dynamic yet again.

Screenwriter Annie Mumolo, who is known for penning Bridesmaids, wrote the original script for this film, which was meant to be a biography about Joy Mangano, the inventor of the Miracle Mop. However, when David O. Russell signed on to direct, he also rewrote the screenplay and based portions of this story on the plights of other female entrepreneurs. While the screenplay is slightly overstuffed, David O. Russell manages to keep the dialogue rapid and vicious. There are several memorable quotes, such as the scene in which Joy is asked what she would do to an adversary in commerce if a gun was on the table and only one of them could prevail. After hesitating, Joy says, “I pick up the gun.” This fiery determination also foreshadows her thrilling verbal stand-off in the climax. Perhaps, the most surprising aspect of the screenplay is that David O. Russell’s dialogue is still as punchy and full of zany energy without certain swear words: Unlike American Hustle, The Fighter, and Silver Linings Playbook, Joy is Rated PG-13.

Thanks to David O. Russell’s meticulous shot selection, there are countless beautiful shots in this film, such as those on display above and below this paragraph. More importantly, Russell is able to capture the sense of wonder in the flashbacks with young Joy as well as those featuring the older Joy fighting to break free of her family and succeed at business. In fact, this film plays like a fairy tale in some regards but the realistic consequences of divorce, demanding families, and questionable business deals help ground this film in reality. This is evident when young Joy holds up a paper bird and says that she does not need a prince. Also, seeing Joy struggle with several pertinent obstacles makes it more cathartic to see what occurs at the end of this film.

Despite the fact that Joy never reaches the cinematic heights of The Fighter and Silver Linings Playbook, it is yet excellent film from David O. Russell.

REVIEW — "In the Heart of the Sea" 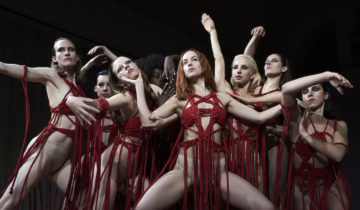