Mysterious and inspiring, Jem and the Holograms injects the well-told tale of the overnight sensation with catchy songs and a positive message for the YouTube generation.

After the death of their inventor father, shy singer/songwriter, Jerrica (Aubrey Peeples) and her little sister, Kimber (Stefanie Scott) move to live with their Aunt Bailey (Molly Ringwald) and foster sisters, Aja (Hayley Kiyoko) and Shana (Aurora Perrineau). Their world is turned upside down when the talented but insecure Jerrica disguises herself as “Jem” (a nickname her Dad gave to his “diamond in the rough”) and records an original song that quickly goes viral after Kimber secretly posts it to YouTube.

While the entire country discovers the mysterious Jem, promises of fame and fortune arrive in the form of powerful record exec Erica Raymond (Juliette Lewis), and with her follow contracts, break-ups and betrayals. With help from her sisters and new love interest, Rio (Ryan Guzman), Jerrica embraces her true identity and in the process, uncovers a mystery left to her by her late father that leads her on a path to destiny.

By engaging online communities early during pre-production, director John M. Chu (Justin Bieber: Never Say Never, G.I. Joe: Retaliation) wisely utilized social media to help sell the reality of the film’s premise. Through a online submissions, Chu collected fan’s YouTube videos to use in the film. These videos not only complemented the scenes they supported, but aided in providing much of the film’s musical soundtrack. Chu also incorporated Google Earth maps to illustrate the characters’ change in setting. The story of Jem was updated to the digital age almost too effectively. The entire picture seemed ready-made for smartphone streaming.

The tone of the film is a mixture of several different genres, including mystery, musical, romance, drama, comedy and science fiction. At one point, there’s even a heist scene. At times clunky, Ryan Landel’s script eventually blends these elements together with the assistance of the casts’ harmonious chemistry and the refreshingly honest performance of the title character, played with genuine sincerity by Peebles (Nashville).

“Facebook gives you a wall so that after you make your life seem perfect, you have something to hide behind.”

Everyone has a secret identity. Online, people can be whoever they want to be. Users display only the most ideal perception of themselves to the world. That’s what social media has become. This film taps into that struggle of maintaining a double life. Jem is a necessary disguise that Jerrica hides behind in order to express herself – much like the artist, Sia conceals her identity so that her personal life doesn’t distract from her music. However, problems arise when those lines are blurred and true identities become lost.

As clever and modern as Chu’s take on Jem and the Holograms is, this movie could have been about anyone. However, the film does provide fan-service with several references to the original cartoon; Jem’s magical earrings, her Jerrica vs. Jem identity crisis, and the hologram-producing Synergy are all featured prominently. The robotic Synergy actually plays a crucial role in the film’s surprisingly emotional climax.

At the heart of the film lies an inspiring message to other YouTubers out there searching for an outlet for their creativity. The film encourages artist to be brave, never fear the unknown, use their gifts to inspire others, and create their own destiny. For true artists, fame should not be the goal. Fame is a byproduct of the successful recognition of their artistic expression. That’s where most movies about a star being born and then thrust into the spotlight and corrupted by fame fall apart. The correct character arc for the rising star is finding out who they are, but not forgetting where they came from. This film gets it right by valuing family over fame.

Of course, this film is just another attempt by Hasbro to cash-in on whatever nostalgia remains for one of their popular properties. However, unlike other Hasbro films (Battleship, Transformers: Age of Extinction), this one was done right. With the use of social media, flashy direction and energetic music, Jon M. Chu managed to cleverly adapt a nearly forgotten 80s cartoon that simultaneously remains faithful to its source material, and appeals to a modern, tech-savvy generation. The fact that he pulled that off is what I find truly, truly outrageous. 3.5/5

Jem and the Holograms, Rated PG, is in theaters now.

Be sure to hit the SHARE button at the top/bottom of this page! 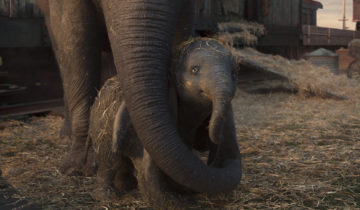