“It Follows” is one of the best independent horror films in decades.

Relative newcomer David Robert Mitchell both wrote and directed this psychological masterpiece and is able to generate a consistent level of dread without a gratuitous amount of special effects or violence. That’s not to say there aren’t any payoffs, there certainly are, but they are earned through great writing and camera work. (as opposed to random cats jumping out of nowhere frightening people.)

The film opens with a magnificent long take.  A quiet morning in the suburbs is shattered when a young woman bolts from her house, haphazardly dressed.  She pauses for a long moment, regains her composure, runs back into the house and then races off in her car.  This riveting sequence fills us with questions, her behavior is nonsensical.  Immediately we are hooked.  The audience wants to know what caused her to behave so strangely, or what becomes of her.

Soon we learn that there is an entity that is passed on from person to person like an STD.  The entity walks in a straight line towards a person until one of two things happens.  It reaches the person and kills them, or the person has sex with someone new, in which case the entity begins following them instead. If it kills someone it will then go back down the line again with the people it followed before. Only those who have been “infected” are able to see this being, which can take the appearance of anyone, but tends to favor the visage of those familiar to the victim.

Beyond the basic creepiness of the story, there are layers of metaphors. (if you’re into that sort of thing.)  For each victim, the entity appears as one of their parents at least once.  It also always appears either naked or in white.  Some have suggested it’s just manifestation of an STD, but perhaps it means more than that?  A manifestation of the guilt parents place upon their children’s sex life and the damage that it can cause?  It’s interesting that we see more of the character’s parents in the entity’s form than in reality.  The film’s resolution offers another possible moral interpretation, but that can’t be spoiled in this review.

Besides a single odd plot issue, the story is immaculate.  The acting is also spot on, accurately portraying characters in their late teens. Complete with a guy lovingly washing his car that is bad need of a paint job.

Students of film and horror aficionados both should not miss this film. 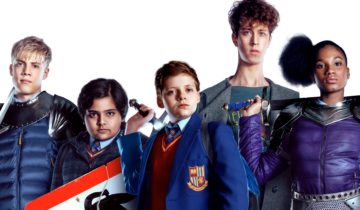