“Hell or High Water” is the thriller/drama, mixed with a little western irreverence, that we need right now. It’ll wash the taste of the disaster “Suicide Squad” right out of your mouth! The story is about two brothers, one with a criminal history, that are robbing banks in order to build up enough money to pay off the same banks so they can keep their family land.  Genius! There are reasons why this land is so important, but I don’t want to ruin the character/story development for you. Everything about this works together so perfectly to make a modern-day Texas western that everyone can enjoy.

The cast/characters are, in the end, what really make this film something special. The chemistry between the two brothers, Ben Foster and Chris Pine, just seems so genuine it completely sells the premise, and the decision leading into the blazing finale. If you Youtube it you can see how they vibed on and off the set as well, and this is critical when a plot relies so heavily on the leads’ relationship. Throw into this mix the perfectly cast Jeff Bridges, and you have all you need. Bridges is right at home as the rough around the edges  Ranger on the steps of retirement. They did a great job writing this role, and he truly embodies an older Texan in how he talks and acts.

Writing and direction were truly on point with this. The characters were all perfectly crafted (and cast), and the story written in such a way that we keep getting little pieces as it progresses. You don’t truly know the END game until the end, and it’s great that it wasn’t so predictable in a time of rinse/repeat films. The writer and director managed to truly capture the Western spirit in Texas, and it made everything just seem so real. From the gun-totin’ bank customer to the surly old waitress, everything felt organic and true.

I’ll briefly touch on the cinematography and sound mixer as, in this case, it truly made a difference. How this was filmed, and the scenery and angles chosen, it all added value to the finished product, and that’s something you don’t get that often anymore. Like in “The Revenant” the camera work, scenery, and towns chosen to shoot are almost characters themselves. Also, this has one of the most bad-ass bluegrass/country/rock soundtracks I’ve ever heard, and it fit perfectly in every scene (unlike a recent DC Comics film that tried too hard).

If you’re looking for a good time at the theater, a almost wholly unique experience, and a quality movie all wrapped in one than come “Hell or High Water” you better see this! The amazing cast kills it with their chemistry and believability, the scenery, albeit not beautiful, was well chosen and shot, the story and writing is great, and the direction is spot on. My only concern is that with a little more editing it would have played a little leaner since one or two parts dragged. This is certainly not one to be missed. 4.5/5

REVIEW — "Kubo and the Two Strings" 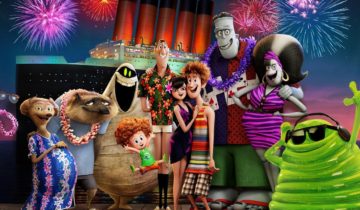