A super-violent, bare-knuckle, in-your-face, first-person action film, Hardcore Henry will hit you like a shot of adrenaline to the dick!

Shot from the point of view of Henry; a super soldier brought back from the dead with robotic enhancements, Hardcore Henry is structured similar to a campaign from Call of Duty – the popular first-person video game that inspired it. Our hero wakes up and is quickly briefed by his wife (Haley Bennett) on his situation before they are attacked and she is kidnapped.

Henry must then put together the pieces of his mission while being relentlessly pursued by soldiers led by Akan (Danila Kozlovsky) – the film’s underdeveloped but physically memorable albino main villain with presumed blindness and unexplained Jedi powers. Yep, it’s that kind of movie. Fortunately, the film makes up for its lack of story and coherent plot with brutal, non-stop, entertaining action.

Serving as Henry’s mission guide is Jerry (Sharlto Copley), an informed ally that respawns as different characters (punk, hobo, WWI major) throughout the film. Copley turns in a tour-de-force performance that not only serves as the film’s comedic backbone, but also centers the story by providing much needed camaraderie to our hero. It’s the richest and most versatile performance the eccentric South African actor has given since his debut in District 9.

With the innovative use of twin, head-mounted GoPro cameras, writer and director Ilya Naishuller puts the audience in the driver’s seat of the film’s well-choreographed action scenes.

Each fight introduces a new weapon (sniper rifle, samurai sword, broken bottle), a new form of combat (hand-to-hand, martial arts), and a new means of transportation (motorcycle, helicopter, tank, horse!). It’s an all-you-can-eat smörgåsbord of machismo fantasy. You want a hero that can parkour jump into a titty bar full of ninjas? You got it, mister!

Although little more than a series of action set pieces that lead to more action set pieces, Hardcore Henry is a mindless, fun ride from its disturbingly graphic, slow-motion opening credits all the way to its violent, Queen-soundtracked, bloody end.  3.5/5

Be sure to hit one of the SHARE buttons at the top/bottom of this page! 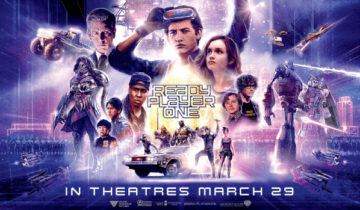