“Fury” is an amazing film that is essentially “Das Boot” for Tanks.

It’s April of 1945. The Allied forces are pushing into Germany and the Nazi army is fighting back viciously even though they know the end is near. Unfortunately for the Allies, the German tanks are far superior in both armor and firepower.  The Allied Forces suffer huge losses to these German tanks.  “Fury” is the name of one of the surviving American Sherman tanks.  Usually piloted by a five man team, as the film opens, they’ve just lost their front gunner.   Brad Pitt is the leader, known as Don ‘Wardaddy’ Collier, a portrayal that is essentially a more serious version of his character in “Inglourious Basterds.”  Rounding out his team is Shia LaBeouf in one of his best performances ever as Boyd ‘Bible’ Swan, Michael Peña as Trini ‘Gordo’ Garcia, and Jon Bernthal as Georgian redneck mechanic Grady ‘Coon-Ass’ Travis.  Returning to base after a particularly harrowing encounter, their deceased comrade is replaced with the completely green Norman Ellison, played by Logan Lerman.  We are able to watch the bond between these men being forged by the brutal flames of War as they close in on Berlin.

There have been an incredible number of WWII films made over the years. It was a pivotal time in history when a number of unprecedented events occurred. Seventy years later most of these countries are still defined by the events of that war.  But these films vary drastically, many are mere propaganda, others practically comedies, while some are excruciating accurate in the atrocities that occurred.  “Fury” seems to exist in the thin grey area between these different genres.  It’s not devoid of humor, but for the most part it is honest in the brutality and cruelness of this war.  Lives are won or lost by sheer chance, many times with no warning at all.  The violence is in this film is callous.  Good people die just as quickly as the “bad.”  Hatred flows as easily as the blood.

There are a number of things that makes this film stand out amongst the glut of WW2 flicks.  The performances are phenomenal.  Shia LaBeouf, who has been annoying both in and out of character, is amazing in this role.  He may have learned to finally channel his neurosis into effective character building, here he creates a man we both respect and pity.  Brad Pitt is in top form, reminding us of why he was regarded as a star in the first place.  Wardaddy Collier is highly revered by his team, even if they challenge him at times.  Wardaddy knows he needs to be the foundation of his team, and their lives depend on it.  To these men, he is a rock, cold, calculating and ruthless, but we are given glimpses into how the pressure torments him.  All of these men, while caricatures on the surface are actually deep characters, self aware of their flaws and virtues.  It’s a great example of intelligent screenwriting.  People are complex, even if they may not appear to be on the surface.

The film structurally has a lot in common with the unparalleled german film “Das Boot” (if you haven’t seen it, go watch it NOW).  We are given a number of claustrophobic shots of the inside of the Sherman.  Rarely are we provided with such intimate shots of what men experienced during the war. (Take a minute and think what was required for these shots: where did the lights and camera go?)  We are given a time with conflicting moral responsible responsibilities who are up against insurmountable odds. Another similar element is the stunning sound mix.  This film would be worth watching in IMAX for the sound alone.   During battle sequences our chest shudders when the cannon is fired and we duck as near misses whistle across the theater.  Unfortunately, with as much praise as we’ve heaped upon the film, it falls short of perfect.  In an attempt to show the vulnerability of the men, there are far too many “man tears.”  Perhaps it’s accurate, but cinematically, it feels as if we are being beaten over the head with the men’s hidden sensitivity.  There are also a few segments that stretch the realms of believability, playing more like a “Die Hard” movie than a historical drama.

It may fall just short of Oscar-fodder, but this is an excellent film, worth experiencing.  The performances, sound, and pacing are all top notch, engaging and memorable. 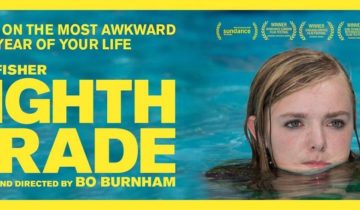