Matt Damon is having a tough year.

Downsizing is directed by Alexander Payne, written by Alexander Payne and Jim Taylor and stars Matt Damon, Christoph Waltz, Hong Chau, Jason Sudeikis, and Kristen Wiig. It tells the story of a couple who decide to undertake a procedure to shrink their bodies so they can start a new life in an experimental community. When the wife refuses the procedure at the last minute, the husband has to reassess his life and choices after befriending an impoverished activist. So, this was a weird one. I’m a big fan of Payne’s work and all the talent behind it, but it’s just weird. I was cautiously optimistic about it, and knew I would see it, but was never sure how it would turn out. So now that I’ve seen it, what did I think? Downsizing is an earnest effort from Payne, but can’t help but being a jumbled and misguided mess. Not sure what it wants to be about, the plot meanders and never really amounts to anything notable or thought-provoking.

Alexander Payne is directing here and while he’s established himself as one of the best working directors, this is a bit of a misfire. For someone known for such sharp and biting satire, he struggles to say anything. Downsizing has a huge identity crisis, it’s really not sure what it wants to be about. Payne has a lot of trouble establishing a tone and any themes, resulting in a messy and honestly sloppy narrative. It’s very hard to care about anything that happens during the runtime as you don’t really care about any of the characters. Payne has taken a massive risk here and while I commend him for making something so daringly original, he’s bitten off a little more than he can chew. I’ll continue to watch whatever he makes, but let’s hope his next project is more of a return to form.

Alexander Payne and Jim Taylor penned the script and it’s a big mess. They will often jump from one idea to the next very quickly and never really go in-depth with any of them. They jump from social satire to economic think piece, to an environmental message. All of which are fine ideas, but when you never really explore any of them, you get an uneven mess. If you were to describe Downsizing in one word, it would be a mess. It’s an undercooked meal that could have used one or two re-writes. They gave it the old college try, but this never really achieves anything. It’s sloppy and uneven, but I can’t deny how ambitious it is. So while their script isn’t too terribly good, by god do I respect them for actually getting it made.

Matt Damon stars here and he does alright. His character is very underwritten so he uses all of his likability and his natural every-man quality to try to act through it. He has a few good scenes, but he isn’t given much to do here. Kristen Wiig is good, but she’s on screen for such a short time, you honestly forget she’s even in it. The same goes for Jason Sudeikis, who plays Jason Sudeikis here. Hong Chau gives a very uncomfortable performance here as I can’t tell if it’s really good, or really racist, but either way, I can’t stop thinking about it. Christoph Waltz probably gives the best performance and is honestly the best part of the movie. He continues to deserve much better work than he’s given. Let’s hope he teams with Tarantino again. On a technical level, Downsizing is, you guessed it, a mess. There is some inspired camera work here, and the editing shifts from being very sharp to very choppy. There are a few continuity errors here but there is nothing to bad featured. The CGI is a bit of an oddball. I’ll just say it, It doesn’t look good. But it’s honestly very seldom used, I can’t really be mad about it. The green screen is really awful and whenever the tiny people are interacting with the normal sized people, it’s genuinely laughable. I don’t know how they would have been able to not make this look silly, but whatever they did didn’t work. I know it sounds like I’m tearing this apart and I am, but the movie isn’t that bad. There is a little to love here and the sheer ambition of it is admirable. I just can’t sit here and try to come up with excuses for this.

So in short, Downsizing is a big, ambitious mess with a lot of underdeveloped ideas and themes. 1.5/5

REVIEW — "All the Money in the World" 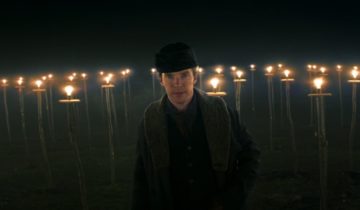