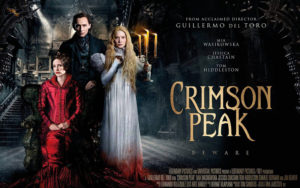 Crimson Peak revolves around the complex relationships between Edith Cushing, Thomas Sharp, Lucille Sharp, and Dr. Alan McMichael. Contrary to what the trailers suggest, this film is primarily a period romance. In spite of Dr. Alan McMichael’s ever-present crush on Edith, a young, innocent aspiring novelist, she falls in love with a broke baronet, Thomas Sharp. Edith and Thomas’ bond, along with a family tragedy, draw Edith away to a house full of secrets and ghosts. The closer that Thomas and Edith grow, the more it irks Lucille Sharp and Dr. Alan McMichael. What follows cannot be summarized without significant spoilers.

Each of the four main characters is well-written, and relatable in some essential manner that makes them more than caricatures. Strong acting from Mia Wasikowska, Tom Hiddleston, Jessica Chastain, and Charlie Hunnam further develop the humanity and plausibility of these characters. Mia Wasikowska, who is known for portraying Alice in Tim Burton’s Alice in Wonderland, gives Edith the proper stubbornness, innocence, and curiosity to make her an engaging protagonist. Tom Hiddleston, who is better known for portraying Loki in The Avengers, emotes so well that the audience can see every internal conflict that troubles Thomas Sharp. Given how complicated his character is, this is essential to making the audience invest in Thomas. Most actresses and filmmakers would have made Lucille Sharp a one-dimensional character. Thankfully, Jessica Chastain, whose best work was in Zero Dark Thirty, provides enough humanity and nuance to make Lucille a deeply tortured human being. Even though Charlie Hunnam is known for his lackluster performance in Pacific Rim and star-making turn in Sons of Anarchy, he is a convincing eye-doctor and “knight in shining armor.” Hunnam’s concern and affection for Edith seems natural, which makes his noble nature endearing.

The screenplay, which was written by Guillermo del Toro and Matthew Robbins only boasts a few truly surprising moments. One of these occurs right before the climax. In said scene, the ambivalence of what is said and done was more gut-wrenching than anything else in this film. The other twists are hinted at so obviously that anyone paying attention will see them coming. As for the dialogue, there are several great quotes that explain the deeper meaning of the horror that the audiences must endure along with the characters. Unlike most modern horror movies, which merely seek to unnerve their audience through jump scares and stock characterizations, Crimson Peak offers meaningful themes and more than enough heart to make it work as a drama.

Another great aspect of Crimson Peak, which much be lauded, is its impeccable visual style. To varying degrees, Guillermo del Toro’s previous films, such as Hellboy, Hellboy II: The Golden Army, Blade II, Pacific Rim, and Pan’s Labyrinth, offered visual splendor. That being said, this is the first film since Pan’s Labyrinth in which Guillermo del Toro utilizes his visual skill and meticulous shot selection in order to support the story’s themes. Dan Lausten’s fantastic cinematography perfectly compliments Guillermo del Toro’s vision and visual style. Consequently, nearly every frame of this film looks like a work of art.

Even the CGI-ghosts that haunt Edith in this film are, surprisingly, well-rendered which makes them memorably horrifying. There are a plethora of scenes where Edith walks around in the dark as she draws closer to dangerous ghosts, which would not work without the aforementioned special effects and Guillermo del Toro’s steady direction. These sequences keep the audience on the edge of their seats. On the other hand, the final act, which features mostly living characters battling, is unrelentingly engaging and suspenseful. 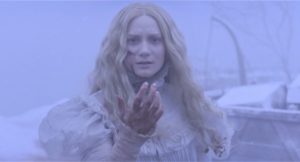 Crimson Peak is a welcome break from the redundant family-friendly Disney fairy tale formula. This dark fairy tale for mature audiences benefits from excellent characters, acting, direction, cinematography, and special effects. With all of this in mind, Crimson Peak is Guillermo del Toro’s best film since Pan’s Labyrinth.

Have you seen Crimson Peak? If so, what did you think?