A Star is Born truly is a tale as told as time, as this 2018 version is the fourth incarnation of the story. You would think that after all these years and different iterations, the story would have worn thin – but director Bradley Cooper delivers the absolute best incarnation of the story to date. The film follows Jackson Maine (Bradley Cooper), an alcoholic, drug addicted, bonafide rockstar as he comes across Ally (Lady Gaga) a struggling musician with a genuine gift for singing. As they fall in love with one another and Jackson helps lift Ally into the spotlight, Jackson’s demons become harder to deal with.

There are so many fantastic elements to this film, but one that impressed me the most was Cooper’s direction. I understand that he has something of an advantage considering he is a seasoned actor who has been on-set with great directors – but it’s largely impressive how his first film out of the gate is nearly a masterpiece. He nails the smaller, more intimate moments between Jack and Ally perfectly – but the concert sequences and musical beats are done with such energy and momentum that it feels like it’s coming from someone who’s been doing this their whole life. I also have to give some credit to Matthew Libatique, who was the DP for this film. There are some seriously gorgeous shots that added a lot to the poetic nature of the film.

The entire cast delivers great performances – Sam Elliot in particular giving the best performance I’ve seen from him in quite sometime. But the film almost entirely rides off of the performances and chemistry between Lady Gaga and Bradley Cooper. Both have never been better in terms of singular performances, but when they share a scene together your heart instantly melts for them. Their chemistry is so lively and genuine that you feel every bit of affection and heartache that the characters do. It’s honestly one of the best on-screen romances that I’ve seen in quite sometime, and it’s so good that it helps the emotional third act have as brutal of a gut-punch as it does.

In the hands of a lesser director, the third act of this film could’ve been overly sappy and falsely sentimental. Cooper goes for a non-traditional finale to this – one where the emotion feels earned but not overwhelmingly cloying. As I said before, this film feels like genuine cinematic poetry. It feels only a tiny bit familiar due to the story being told before, but it has never been told with as much humanity and beauty that is on display here. I was absolutely floored by this film – from the music to the romance, it was absolutely sweeping. Look out, Oscars – Cooper is coming for the gold. 5/5.

REVIEW — "A Star is Born:" Great performances and incredible music 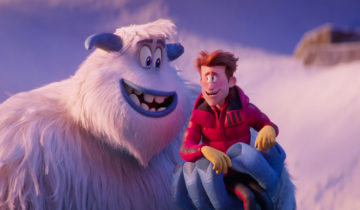