INTERVIEW — Djimon Hounsou on Marvel’s “Guardians of the Galaxy”

We had the opportunity to sit down with two-time Academy Award Nominee Djimon Hounsou (“Amistad,” “Gladiator,” “Blood Diamond”) about his new film, Marvel’s “Guardians of the Galaxy.”

The interview is short and sweet, clocking in less than 15 minutes, so give it a quick listen!

Be sure to follow us on Facebook to be the first to learn about the latest news, reviews, interviews, contests, giveaways and advance movie screenings!

Some of the things discussed/that happened:

When asked, “Does starring in ‘Guardians of the Galaxy’ mean that we will probably not see you in future Marvel films? Perhaps reprising a role that you’ve previously played… like ‘Black Panther?'”

Dan: “I don’t know. That’s why I’m asking if because you were in this do you think that would preclude you from being in things in the future, do you think? Or do you think they’d be open to allowing you to take on a more prominent role?”

Djimon Hounsou: “Who say I couldn’t be anything else?”

DH: “I’m hopeful. I’m just basically saying there’s no limit to anything. Just because you happen to be playing a character in one movie. I mean, you’re about to see some characters (actors) in Marvels go back and forth, and maybe being something else just because he seems to be quite right and perfect for it, and the interpretation of that character. ‘Black Panther’ is still something that the minorities are still looking forward to seeing on the big screen. Kind of like ‘Spider-Man,’ ‘Iron Man,’ and all that to see ‘Black Panther on the big screen… we are foaming at the mouth for that.”

Dan: “I think it’d be fantastic….for you to be ‘Black Panther'”

It certainly sounds like he is willing and able to play the “Black Panther,” or if Marvel wants to go a younger route he could play his father as well.

Djimon Hounsou voices “The Black Panther” on Marvel’s animated mini-series about the titular character back in 2010, and he certainly has the physique, demeanor, and attitude to bring the character, triumphantly, to the big screen.

Also, Special Shout Out to Djimon Hounsou for being such a bad-ass. He signed a copy of “Gladiator” on Blu-Ray for my girlfriend, because it’s her favorite movie (followed in second by “Snatch”). He is such a nice guy, and we wish him the best with everything!

“Guardians of the Galaxy” is in theaters NOW! Go See It! It was a LOT OF FUN!  Don’t miss our review HERE!

REVIEW — "Guardians of the Galaxy" 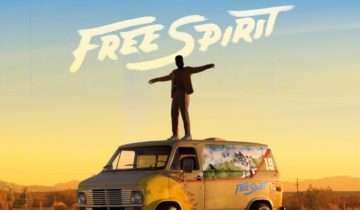