Watcher follows Julia (Maika Monroe) who has just moved to Romania with her husband, who is there for a job. She is very much an American and a fish out of water in this land where she doesn’t even know the language spoken by every person in the city. From the get-go, Chloe Okuno creates a very lonely atmosphere for our protagonist that turns eery the moment the silence of the apartment/city creeps upon her.

However, one night she decides to pass the time away while her husband is at work with people-watching from her apartment window. This helps her pass the time well, until she is unsettled when she thinks she sees a man from the complex across from hers is staring back at her through his window. It’s unclear whether or not he actually was staring directly at her, but it’s enough to make Julia freak out.

Throughout the film, we are taken through a journey of close-calls and genuine frights as Julia becomes more and more paranoid and obsessed with the idea that she might have a stalker. As she begins to encounter more and more citizens of the city as she goes out into public more – there become several suspects that may connect to grizzly crimes that are occurring in the area. Or is it all a coincidence? Chloe Okuno does a really great job at milking the tension as far as it can go.

Some may find the film to be a bit slow-moving at times, but I found the atmosphere and deliberate pacing of the film to make it even more unsettling and effective. Once shit finally hits the fan at a certain point, it’s done so with brutality and grizzly images that will truly stick with you. It’s not quite a perfect thriller – but I found it to be extremely entertaining and effective with a wonderful performance from Maika Monroe. 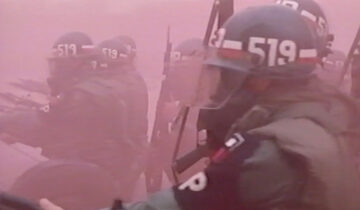