Shot on a real race track in Arizona, Jockey follows Jackson (Clifton Collins Jr.) an aging jockey who is hoping to win one last championship before his body completely fails him. All of this is complicated when a rookie, Gabriel (Moises Arias) shows up on the race grounds and claims to be Jackson’s son. This obviously puts a lot into perspective for him, and is eventually swayed into helping Gabriel learn the ropes of being a jockey. Throughout the film, we step into a world that feels incredibly authentic and genuine to what the real world of jockeys must be like. I have no personal experience in that arena, but much like Chloe Zhao’s The Rider, it all feels so real in the way people talk and operate in this space.

I’m a sucker when it comes to father/son movies, and this is really no exception. While the relationship is even more complicated than the synopsis would have you believe, Arias and Collins have absolutely stellar chemistry with one another throughout the film. Molly Parker plays Ruth, a trainer and friend of Jackson, and is equally fantastic in her role. There are some small supporting cast members – all of which seem to either be local actors they hired or real jockeys they got to play versions of themselves. There are moments where they discuss the sport and what is drawn them to it, and it is absolutely riveting. 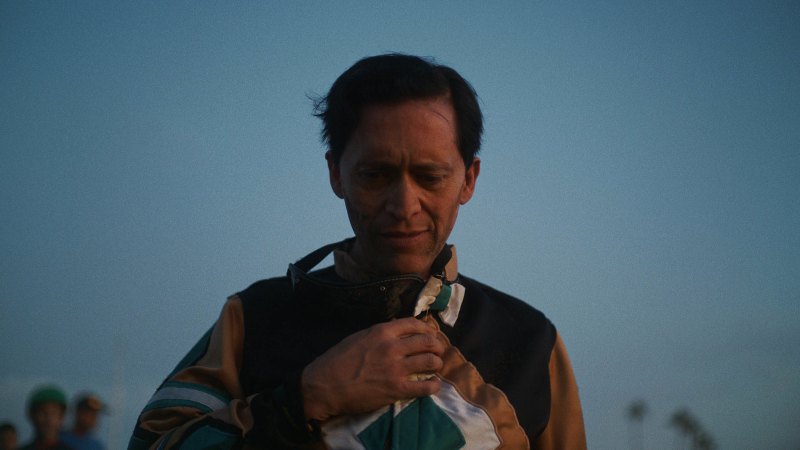 First-time director Clint Bentley has such an interesting visual language and I was sucked in from the moment the film begins with absolutely gorgeous cinematography and long tracking shots. He’s the kind of director that isn’t afraid to let scenes go on a little longer when it services the characters and genuine nature of the dialogue they’re exchanging – but also lets scenes of the characters simply training the horses or walking around the grounds extend longer than normally. This might feel a bit exhausting, but the absolutely stunning cinematography in each and every frame makes it all so visually impressive and ravishing to look at.

There are certainly elements of the screenplay that are reminiscent of other father/son films, or even simply films about aging men who are trying to do what they do best for just a little while longer. But the story is told with such authenticity and love, and you feel it in absolutely every frame. Sometimes, in my eyes at least, it’s okay if a story is a bit familiar if you fully buy into why this artist is wanting to tell it. And from the moment Jockey began, I was fully engaged in its narrative, characters, and visual language. It’s an incredibly lovely film.

SUNDANCE REVIEW - "Prisoners of the Ghostland"