Trey Edwards Shults exploded onto the independent cinema scene with 2016’s Krisha and 2017’s It Comes at Night – and from the moment Waves opens, it pops with the vibrant color of sunny Florida and two teenagers singing along to Animal Collective‘s Floridada. It’s evident, right away, that Shults hasn’t missed a step and is only improving with his craft. The camera rotates around these two characters in such a unique and innovative way, the sound design is purposefully scattered, and it immediately sets the tone for what is to come for the next two hours. Waves is a deeply human drama that is heightened by its incredible soundtrack and laser-focus on character – and the tremendous performances at hand only elevate this even more.

The film follows the journey of an African-American family as they struggle with hardships, conflicting views and emotions, and everything in-between. I’m being purposefully vague about the plot because I think Waves works best when it hits you unexpectedly. A lot of this film rides off of the bold narrative choices it makes, and while that might feel gimmicky to some, I found it to feel natural and surprising in all of the best ways. This isn’t to say that the film is without fault in certain areas, but I think this is a film where the heart and ambition of it all trumps its shortcomings by the end. 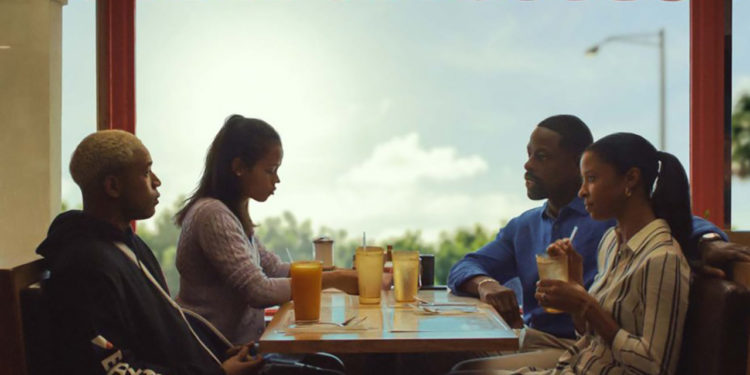 You’d be remiss to not talk about the wonderful performances at hand in this film. Kelvin Harrison Jr is a bonafide star. From It Comes at Night to Luce to now Waves, he is giving nothing but incredible performances in each film he appears in. There is such a sense of urgency and rawness to this performance that feels so unique and powerful. Taylor Russell is also fantastic in the film, playing Harrison’s sister. Both are completely different performances that compliment each other due to their nuance and naturalism. Alexa Demie, Lucas Hedges, and Renée Elise Goldsberry all give great supporting performances here – but the real standout from the supporting cast is Sterling K. Brown, who plays their father in the film. This character feels unlike any other that Sterling has ever played before; a complete opposite to his character on NBC’s This is Us. I know Awards season is packed this year, but I’d like to see him get some awards recognition.

As I said above, the film does suffer at points – mainly, I think, due to some subject matter that is a bit questionable in how it was portrayed in the film. There’s also the fact that it doesn’t necessarily feel like it is justified in its own running time. However, this is an incredibly ambitious film that even despite the roughness around the edges, I found a lot of beauty in. Let Waves hypnotize you with its infectious score and soundtrack, and let it break you down with its powerful emotion. I see this being one of the more controversial and topical films of 2019, but I think by the end, it all comes together in a unique and powerful way.