Jordan Peele made himself a resounding voice in horror after just one film with Get Out. Where some directors will repeat general themes and ideas throughout their follow-up features, Us is a bonafide original horror film through and through. The film follows Adelaide and Gabriel Wilson and their two children as they go on a Summer Vacation to Santa Cruz. What starts off as a simple family outing quickly spirals into a plunge of madness for Adelaide, who’s repressed memories come back to surface as identical versions of her family come to invade their home.

Above is the general premise of Us, but underneath the basic idea and concept that the film rides off of – there is so much more social commentary and hidden meanings to be found. This should come as no surprise, as Peele proved with Get Out that he is a super precise filmmaker that makes sure every moment and frame of his film matters to the general story and message he is trying to convey. The worst part of all this? I feel like I can’t even talk about all the things I took away from this film without spoiling it for people who haven’t seen it yet. This is one of the very best films to go into completely cold.

The entire cast here is pretty outstanding. I can be fairly critical of child actors, but Madison Curry, Shahadi Wright Joseph, and Evan Alex are all tremendous here and work marvelously with the dark material. It’s refreshing to see actors like Winston Duke, Tim Heidecker, and Elisabeth Moss perform in a different, darker setting. Each of them have a moment to shine comedically, but they also fully commit to the moments when they have to delve into the darker elements on display. However, I believe this is Lupita Nyong’o’s show through and through. The dynamic performance that she gives her is unreal. She essentially gives two completely different, yet equally fantastic, performances here. And the way you view the performance will alter upon multiple viewings. It’s one of those performances with layers, and I truly believe it’s her best work yet.

It’s also super refreshing to see Peele evolve as a filmmaker with this one. While Get Out was a very well done film for a first feature, Us feels like his next step in becoming an auteur. His presence is extremely felt behind the camera, and he seems much more confident in some of his visual and stylistic choices this time around. There are two or three sequences where my jaw was dropped due to the way he perfectly executed tension and terror. Yet, he always makes time for getting to know his characters in quieter moments so that the moments of sheer horror actually mean something to the audience.

Us might not please a lot of general movie goers due to so ambiguity and truly weird themes and concepts on display – but I, for one, am glad we are living in a time where Jordan Peele is getting to make his mark on cinema. Despite whatever minor flaws you might be able to nitpick here, I can honestly say that I’ve never seen a film quite like this. Any comparison I have to another film is completely light and a stretch, because Us feels entirely original and wholesomely personal. I can’t wait to see what he does next. 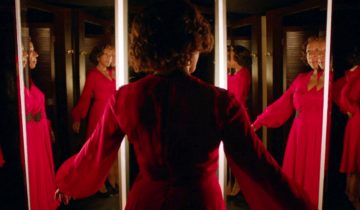