A harmless bedtime story for tender-hearted children who scare easy, The BFG marries the creative whimsy of two of the world’s most fantastical storytellers, Roald Dahl and Steven Spielberg with charming results.

To quote The BFG himself, “Dreams are quick on the outside, but long on the inside.” This quote doubles as good a description of the dreamlike adaptaion of Dahl’s classic, 1980s-set, The BFG – a safe and gentle children’s film that feels longer than it is due to its sleepy first half.

The film follows orphaned, London insomniac, Sophie (newcomer Ruby Barnhill) as she is stolen away to Giant Country one night by The BFG (Big Friendly Giant).
From this point, the film meanders quite a bit in it’s attempt at world-building by establishing the dream-catching BFG’s home, purpose for taking Sophie and his mythical role among the other larger, unfriendly giants.

Author Roald Dahl’s BFG comes to life through the endearing and eye-watering motion capture performance of Oscar winner, Mark Rylance (Bridge of Spies).
The current best supporting actor recites a Wonka-esque vocabulary of blended words and phrases as the film’s title character and does so with an innocent charm of well-meaning befuddlement that captivates and connects with the audience.

The gentle relationship between Sophie and the BFG is the central beating heart of the story. Both actors portray this friendship between two lonely souls who don’t fit in with those around them with playful earnestness and protective loyalty. Theirs is a genuinely strong bond that may feel familiar to many Spielberg fans.

The BFG proudly markets itself as sharing the same creative team behind the enchanting, ground-breaking, crowd-pleasing, blockbuster, E.T. The Extra Terrestrial – which unfortunately immediately puts the film at a disadvantage. They unwittingly brought an unfair comparison upon themselves.

While, indeed, both films share the same director (Spielberg)and screenwriter (the late, great Melissa Mathison), the far superior E.T. The Extra Terrestrial is in an entirely different class.
Coincidentally, I had the pleasure this week of experiencing a theatrical screening of E.T. in its original 1982 cut. Unlike The BFG, the small-scale world of E.T. looks and feels real and there are legitimate risks of danger and peril. Lives are at stake. The original cut even included a since-removed extended death scene in which Peter Coyote closes dead E.T.’s eyes! It’s a chilling moment, but it’s earned and effective. Inversely, there is no real danger in The BFG except several repetitive scenes of Sophie nearly getting sniffed out by some of the dim-witted bad giants, played with obnoxious glee by Jermaine Clement and Bill Hader, among others.

The giant villains of The BFG are really just a group of nonthreatening, hungry idiots who only pose a risk to a single little girl who shouldn’t be in Giant Country in the first place. As I mentioned, the film could benefit from a shorter run time. Shaving off 10 minutes would have made for a tighter tale. However, the film picks up in the third act as Sophie and The BFG conspire to rid Giant Country of the mean giants once and for all with a plan that includes Inception-like dream planting, helicopters full of “snozzcumbers” and “whizpopping” with “human beans” like the Queen (Penelope Wilton).

With a very proper, British cadence and the most outrageous fart scene since Eddie Murphy’s The Nutty Professor, The BFG features whimsical fantasy and gentle storytelling that’s safe fun for kids of all ages. 3/5

Rated PG, The BFG is in theaters now.

REVIEW — "The Legend of Tarzan" 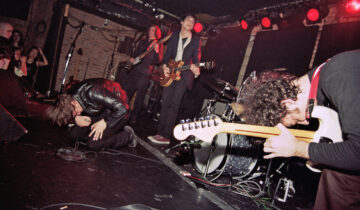 SUNDANCE REVIEW – “Meet Me in the Bathroom”