Christopher Nolan is no stranger to coming to the rescue of movie theaters in dry movie seasons. But will Tenet be strong enough of a force to fill up 30-50% capacity showtimes at your theater? Only time will tell. On the one hand, this is a truly epic and original film by every sense of the word. Most will label this as a time travel film, but it’s just blatantly false. Tenet has shown off how time inversion differs from time travel consistently in the marketing campaign, but the film itself truly does feel unique not only in the trippiness and originality of seeing inversion brought to life – but the way Christopher Nolan blends in classic elements of espionage and high-scale action. On the other hand, while Tenet may seem like the perfect film to open theaters back up with, I question how average movie-goers will vibe it. In a film so vague on characterization that its lead, played by John David Washington, is literally just called ‘The Protagonist’ throughout. While Inception was a high-concept blockbuster, it ultimately felt extremely character-driven when it came to Leonardo DiCaprio’s Cobb. Tenet is no doubt a film mostly focused on its concept and the mechanics that make it operate/the world that it functions inside of.

The film follows The Protagonist – after a loud and exciting opening set-piece at an opera house, he is thrown even deeper into his life as a secret agent and is introduced to time inversion. To understand time inversion, it’s up to him to understand how time itself operates and how cause/effect are correlated but not exclusive to the order in which we see them play out in real-time. It’s more about catching a bullet than firing one and getting through a door rather than opening it. If all this sounds confusing.. you likely won’t be alone! It’s an extremely dense movie that throws a lot of exposition at you very quickly. However, if you pay close attention to the dialogue and story – I think it could be an extremely rewarding experience. 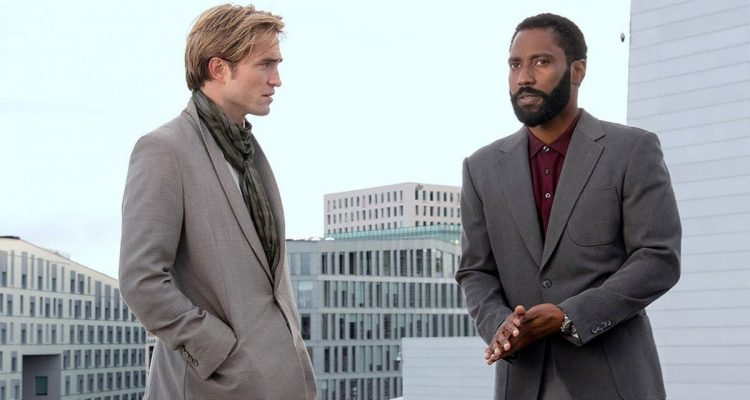 For all the complexities of the science and mechanics of how time inversion operates or event exists in the first place, the espionage angle to the film is surprisingly simple. The Protagonist is partnered with Neil (Robert Pattinson) to trace the mystery of who is supplying and selling the inverted weapons, and come across Kat (Elizabeth Debicki) who is being blackmailed by her husband (Kenneth Branagh) to stay in an unhappy marriage. And from there, the inversion shenanigans only get wackier. This is all elevated by the performances at hand, as John David Washington is a more than serviceable lead with charisma and screen presence for days. Elizabeth Debicki always delivers, and even makes the most of a character that I feel was written a bit too thin. And Robert Pattinson and Kenneth Branagh both give tremendously hammy performances that really *shouldn’t* work, but somehow do. They bring charm and wit to a film that is riding heavy on a concept that most movie-goers won’t be able to fully comprehend.

However, the real star here is Christopher Nolan’s direction. Time and time again, he has proven to be one of the most impressive directors today; a genuine auteur who knows the importance of practical effects and originality. There are a handful of action sequences in this film that simply blew my mind – not only are they all exhilarating and extremely high-scale, but they are so impressively shot (particularly the moments that feature time inversion) that I wonder how someone even goes about filming half the stuff displayed here. Even aside from the action sequences, he simply just knows how to carry a film and even everything out with quieter moments between characters; and with the help of legendary DP Hoyte van Hoytema, the film is absolutely stunning to look at. It wouldn’t be a proper espionage film without the gorgeous locations and colors.

The truth of the matter is, I don’t know how general audiences will perceive this film. While I agree with a few of the general complaints about the lack of characterization keeping this back from being a masterpiece, I truly believe that if you stick with this film from the get-go and truly pay attention to the concept, ideas, and story – it’s an amazing and highly rewarding experience. There are very few films that can surprise you and evoke a sense of wonder, and Tenet truly did it for me. While I still have questions about some character motivations and the mechanics of inversion in some sequences, I felt a deep sense of genuine satisfaction when the film ended and I mostly understood the entire thing. It’s a rarity to see a film with this big of a budget released by a major studio be so original and complex. I truly loved it.