REVIEW — “Revenge of the Green Dragons”

Based on true events, “Revenge of the Green Dragons” explores the NYC Chinese gang violence of the early 90s. Both a blessing and a curse, the film nails not only the ambiance of the time, but also the cinematic content,style, and tone of that era.

During the mid to late 80s there was a massive influx of Chinese immigrants to New York.  Following a version of the American Dream, they came to the U.S. for a chance at a better life, even if that chance was via a life of crime and violence.  The film, directed by Wai-keung Lau (Infernal Affairs) and Andrew Loo follows the life of two boys, adoptive brothers, who came to the states as children.  Sonny (Justin Chon)  and Steven (Kevin Wu) struggle to find their way in this new world.  Smuggled in with a group of illegal immigrants, they have to work as slaves to pay off the trafficking debt.  Tempted by a quick path to freedom and money, many young boys are easily recruited into one of the local gangs.   Sonny and Steven are sucked into this brutal world and become members of the Green Dragons, quickly shedding their innocence and becoming ruthless killers.  As the years progress, both brothers will experience events that will test their loyalty to the Green Dragons.

How their storylines play out, and who we perceive the heroes and villains to be, is one of the elements that make this script interesting.   While the core storyline is as old as Moses, the layers of relative moral ambiguity, and the interesting environment, keep things fresh.  The cinematography and directorial choices are also engaging in that the film itself is reminiscent of a late 80s, early 90s, Asian crime drama.  The film grain, shots, and use of “Miami Vice” style soundtrack are all very historically accurate.  It draws you further into the time period but grows tiresome after a while, especially when the film’s pacing drags.

The Directors were obviously trying to create another crime drama epic, but in the shadow of “Infernal Affairs” and “The Departed”  the film pales.  The story is a bit too simple, the pacing a bit too slow, and action just a bit too lacking.  As a whole, it’s a very good film, but its tendency to remind us of other movies that are slightly better detracts from our ability to enjoy it. 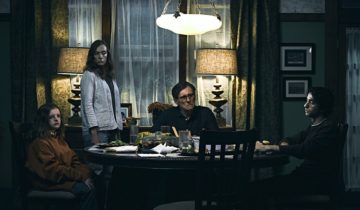