Nostalgia is a sentimental affection for the past. This phenomenon goes hand-in-hand with the legend of Peter Pan.

A convenient example of my own personal nostalgia can be found in Steven Spielberg’s 1991 live-action Peter Pan film, “Hook.” That film was almost universally panned by critics (I see what I did there), and yet it is beloved by a generation, myself included. It is endlessly quotable (Bangarang!), features an all-star cast (Robin Williams), and has accumulated a considerable amount of nostalgia. However, upon re-watching it as an adult, I can understand the accusations “Hook” has received for being overly sentimental, saccharine and just plain corny. Still, my parents tolerated it just to make me happy and gave me a lasting memory in the process. That’s nostalgia.

Author J.M. Barrie’s source material is understandably difficult to adapt without taking a left turn into schmaltz-ville. The well-established themes of “Believe in yourself!” , “Stay positive!” and “Never grow up!” that are prevalent in “Pan” are difficult for most adults to relate to. Why is that?

Because they grew up.

The happiest thoughts most adults can muster are those of nap-times, vacations and winning the lottery. The wonder of Neverland was never meant for grown-ups. This information is not new, people. It’s all right there in the book.

Director Joe Wright’s (Atonement) live-action origin story is without a doubt a family film targeted at children, and while I enjoyed watching it with my kids, I feel I would lack the patience required to enjoy it if I were to view it solo. With that realization in mind and through the eyes of my children, I allowed myself to accept and explore the film’s fantastical world.

“Pan” begins with Peter’s mother (Amanda Seyfried) leaving her infant son on the dreary steps of a London orphanage – his only token is a pan necklace she places around his neck. The subsequent years bring another World War, and with it rations and air raids. As orphans begin to mysteriously disappear in the night, young 12-year-old Peter (Levi Miller) finds himself at the center of another war raging in a distant land that feels more like home than anywhere he’s ever been.

The film features several exciting chase sequences that will keep the audience alert, if nothing else. The escape to Neverland offers an abundance of attractive visual effects that include an air battle over London and flying pirate ships ascending into space. The CGI, while obvious and busy, is never overwhelming. Once in Neverland, we are greeted by a strange serenade of Nirvana’s “Smells Like Teen Spirit” in a scene straight out of “Mad Max: Fury Road” – but with kids. The Immortan Joe lording over the lost boys in this film is the almost unrecognizable Hugh Jackman – relishing his villainous turn as Blackbeard the pirate. His thirst for control over Neverland requires the mining of pixie dust, hence the orphaned slave labor. Blackbeard is unstoppable in his mad quest and only gives pause to the ancient prophecy of his eventual defeat at the hands of a boy… a boy who can fly.

Jackman delivers each line with a bite of nasty charm followed by a devilishly forgiving smile. He masterfully juggles being truly terrifying and comically arrogant in nearly every scene.

A few more chase scenes follow – littered with screaming and explosions. These set-pieces are simply loud and bombastic devices to get the characters from point A to point B. The charisma and likability of the leads help navigate the viewer through the barrage of noise.

Another character that is acted through his teeth is Garrett Hedlund’s dashing portrayal of scoundrel James Hook. I can now understand why Hedlund’s name has been thrown around as a candidate for young Han Solo in the upcoming Star Wars spin-off. He’s got the chops… and chompers, apparently.

Newcomer Levi Miller, plays the orphaned Peter Pan with plucky wonder. As the chosen one with thrust upon responsibility, Miller balances the frightened insecurity and determined bravery of Peter Pan with seasoned maturity.

Because this is an origin story of well-known characters, there are several not-so-subtle moments of foreshadowing shoved in between all the action. For example, Hook uses an actual hook as a tool and has a natural fear of crocodiles. There is even a literal wink to the audience at the end of the film regarding Pan and Hook’s doomed friendship. It’s a little on the nose, but part of the fun is in guessing when the other shoe will drop regarding how the allies will one day become enemies.

I recognize that I sit far outside of this film’s target audience. While I did find the film lacking in several areas – mostly plotting and character development (Rooney Mara’s Tiger Lily isn’t given much to do) – I still managed to truly enjoy this stunning, amusing and lively original version of “Pan” because I viewed it as intended. I expected nothing more than an adventure to another world, and “Pan” delivered. I’m not saying you have to be a parent, a child or accompany a family to appreciate this film, however; it helps to realize what you’re investing in when buying your ticket to a family film.

Perhaps one day my children will fondly remember sitting in the theater next to me as they watched this entry into the Peter Pan saga. Perhaps, too, this “Pan” will give them a shared sense of nostalgia: a sentimental affection for the past.

Be sure to hit the SHARE button at the top/bottom of this page! 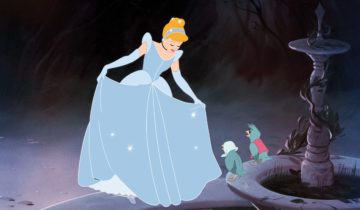