Very few films that attempt to tackle the millennial generation and our obsession with social media are able to get it right. It’s either far from accurate or simply way too preachy for its own good. Maybe those films and their themes speak to older audiences, but as someone who has grown up with social media nearly my entire life, I need a little bit more substance than just the usual “Phones and apps are bad! Put them down! Connect with people face to face!” message that has been shoved down my generations throat countless times before. Satire is at its best when its done with sincerity, intelligence, and a genuine understanding of what it’s attempting to say, and why it wants to say it. Ingrid Goes West absolutely knows what its trying to say about social media, the glossy LA lifestyle, and the dangers of falling for the illusion of a person’s social media persona. There are upsides to the immediate gratifications of being connected to every person at every second of every day.. and there are definite downsides; Ingrid Goes West is a satire, and ultimately a timely character study, of the lowest downside there is to all of this.

Ingrid Thorburn (Aubrey Plaza) is an extremely lonely, mentally unstable, grieving young woman who is fresh out of a mental institution for an incident shown at the very beginning of the film. After setting her sights on a famous social media star named Taylor Sloane (Elizabeth Olsen), who seems to embody everything she wants out of life, she heads to LA with a backpack full of cash and only a slight plan of what she wants to do once she gets there. After many awkward almost-encounters with Taylor, Ingrid ultimately comes into contact with her by stealing her dog and returning it a day later, just to have a chance at a face-to-face encounter. This leads to an unexpected friendship between the two, as they make their way through vegan restaurants, high-end parties, drugs, and a ton of selfies inbetween. Of course, very little is as it seems and very quickly spirals into something much darker, crazier, and pretty damn’ uncomfortable than what you may be expecting. The energy this film carries is infectious.

The main reason this film works as well as it does is due to Matt Spicer and David Branson Smith’s air-tight screenplay. It also helps that Spicer directs this with extreme confidence and a near masterful execution at balancing different themes and tones. Ingrid is an astonishingly complex, nuanced character that could have easily gone wrong from the first scene. Luckily, these guys have such a great understanding of what makes her compelling. Despite doing so many awful and reprehensible things throughout the course of the film, they still manage to make Ingrid a sympathetic character without it feeling forced. Aubrey Plaza is excellent in the role, nailing the dark humor and making the emotional moments all the more potent. This could have easily backfired on her as an actress, but she sticks the landing so nicely that she delivers both one of the best performances I’ve seen this year, as well as one of the most interesting characters I’ve seen on-screen in a while. The supporting cast also kills it here – the standouts being Elizabeth Olsen as the self-obsessed, valley-girl and O’Shea Jackson Jr. as the utterly charming and subtly hilarious landlord/lover, making for an excellent foil of truth against Ingrid’s absurd actions.

It’s an impressive feat to make something that’s as equally compelling and disturbing as it is outrageously entertaining and darkly funny as Ingrid Goes West is. The film takes more than a few ambitiously dark and unexpected turns that may or may not lose potential audience members once the film is released. However, if you’re into this from the start and can stick with it throughout, you’ll be treated to one of the most intelligent, witty, and ultimately truthful character studies and timely satires of the 21st century thus far. It’s not exactly a perfect film, but it soars above and beyond similar films about millennials and social media that have come before due to its sheer originality and impeccable understanding of the subject matter it is tackling and the era in which it takes place. 4.5/5. 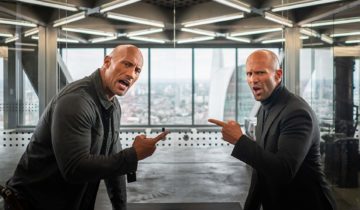