Free Fire is an all out explosion of a shoot-’em-up movie. The film is set in the gritty 1970’s scene of Boston. An arms deal is happening in a sordid factory, and all these strange bands of characters start trickling in so they can get what they need. Each character has their own agenda as the guns come out, trying to buy or trying to sell. Or even play one another… Then in a sudden and unfortunate turn of events, a fight breaks out, and then first blood is drawn with a smoking gun. From there, everybody tries to make it out alive, but not without getting what they came for.

Let me start out by saying this, Free Fire is fun as hell. I really had a good time with this film. You can really tell this was an all around fun movie to make because the actors really flesh out their character well. However, I have to give credit to the script for doing that. Director Ben Wheatley and writing partner Amy Jump really were smart about this script. Each character is very realized. You know what each character does and what they stand for based on their individual arcs. To do this with one or two characters is one thing, however, Free Fire has way more characters to deal with. With that being said, Free Fire actually pulls it off. I found myself caring about what each character’s role was, which is hard to do in a straight action film and when you have so many characters. 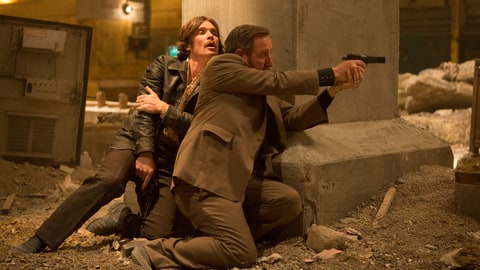 Kudos also go to the FX department. The action in the film feels so real, and that’s because it is. The gun fights are a delight to watch, they’re shot well, the action is fun, and the funny quips keep flying. The set is also worth mentioning (mainly because Wheatley created his first draft of the set on Minecraft) because the film primarily stays in the confines of an abandoned warehouse. The challenge of keeping everything together in one area throughout the whole film really pays off. It adds to the “stand-still” effect of the shoot-out. Cover is so sparse that it is hard for the characters to move, and when they do their moves become more desperate. Altogether, Free Fire is like riding a rollercoaster. It’s a boatload of fun, and you wanna go ride it again after you see it. The comedy is there, and the action is there. The characters are well acted, and their stories are well done. So if you’re looking for a fun and funny shoot-’em-up, Free Fire is for you. 4.5/5

Packaging– This is my main source of disappointment. The case for the Blu-Ray (with the VOD code) came to me in poor condition. This may be just one experience, but hey it’s my job to report the news. There was a hole on the slip cover that went through into the disc, making it scratched, causing the movie to skip a little bit.  Overall the design of the slip cover and disc case were great, but the packaging literally interfered with experience watching the film.

Audio/Visual- The sound quality of the film was tremendous, the 5.1 DTS-HD Master Audio really adds to the sonic quality of the film. The demand for the sound to be great is high, Free Fire is based on an all-out gunfight after all, and the sound delivers. Visually the film runs on 1080p High Definition and utilizes a 16 x 9 Widescreen image along with a 2.39:1 aspect ratio. The visual quality of the film is great, sure, but I wouldn’t say it’s anything to die for.

Bonus Features–  You remember when Blu-Ray’s offered loads of extra bonus content? Me neither. This film is somewhat of a disappointment when it comes to the amount of bonus material featured along with the disc.

Would I tell you to get the Blu-Ray? Only if you’re a fan of the film (but that kinda goes without saying, doesn’t it?). Overall it is great, but it doesn’t offer much in terms of a new viewing experience. Also, don’t have it shipped to you because apparently some copies just don’t make it out in one piece…