Deepwater Horizon depicts the 2010 BP oil spill in the Gulf of Mexico that cost the lives of 11 people and was declared the worst spill in US history.  It is estimated that it was 8-31% larger than the previous spill to hold that title.  While most know about the spill itself, others (your’s truly included) did not even know the name of the oil rig, or the stories of the lives lost on it or how they perished.  As Gina Rodriguez said in her talk show appearance to promote Deepwater Horizon, the goal was to tell it the same way director Peter Berg did with The Lone Survivor;  Powerfully, through their eyes.

This is a different take on the disaster genre with actual people to blame and not Mother Nature.  Namely, BP executives and the oil industry as a whole.  You will feel for everyone on the rig except for the executives who have their own office space, far separated from the crew they employ. John Malkovich is a SOB who, since his first villainous role in Dangerous Liaisons, spectacularly brings to light one of the greedy BP executive found guilty of manslaughter.  He becomes the tornado, earthquake, or tidal wave, and you will enjoy every bump and bruise he receives.

Other noteworthy performances by Gina Rodriguez of Jane the Virgin and Dylan O’Brien of The Maze Runner series bring heart to an otherwise dark setting.  When you watch something based on a popular event, most times you have an idea of how it will end, but how so many survived an utter hell on a floating hunk of metal roughly 41 miles off the Louisiana coast is the suspenseful part that will leave you guessing.  There are tens of minutes that go by with a mixture of sweat and tears, wondering how anyone could have made it off the rig alive, and that certainly is the goal for the disaster genre.

Very entertaining and exhilarating, I just may not want to watch it again due to the pure thrill this gave the first time, and that would be lost the second time around.  Not that it was scary, but that it was heartbreaking and, at times, disorienting.  Deepwater Horizon truly honors the memories of those who gave it all for their job and the safety of others while begging you to consider exactly what’s involved when filling up at the gas station.  3.5/5.

REVIEW — “Guardians of the Galaxy Vol. 2” 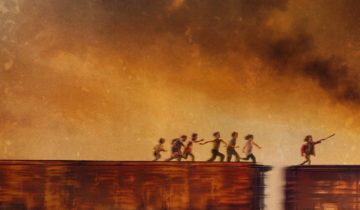