Home›Movies›REVIEW — “Can You Ever Forgive Me?”
Movies 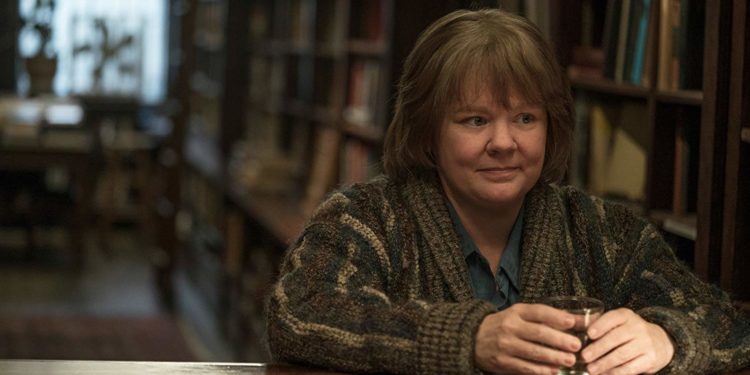 As we ramp up into the heat of Oscar season, we’re beginning to see both some of the best films that 2018 has to offer, as well as some of the best performances that you can expect nominations for. Can You Ever Forgive Me?, which is sure to grab several nominations, tells the crazy true story of writer Lee Israel (Melissa McCarthy), who is at the peak of a slump of writer’s block due to loneliness and feeling out of touch from the modern age. When her cat gets sick, her rent is months past due, and she comes to a rude awakening that she may never print a successful novel again – Lee decides to put her skills to use again and forge letters from people like Katharine Hepburn or Estee Lauder. What starts as a quick way for Lee to get money quickly evolves into a long-term career for both her and her friend Jack Hock (Richard E. Grant), and even becomes something of a passion for Lee.

While the central story of this film is entirely engrossing and is a large part of why I found the film to be as great as it was, I was really taken back by how much of a character study it was on Lee Israel and her toxic isolation and loneliness. The film doesn’t necessarily excuse Lee’s actions, but you completely understand what drove her to doing what she did, and why she continued to do it for as long as she did. Melissa McCarthy delivers an absolutely Oscar worthy performance in this, as she brilliantly balances Lee’s dry wit and subdued emotions. It’s a tricky performance to pull off, and even trickier to play it in a way that makes her come across as sympathetic instead of irritating, but she does it near-perfectly. Her chemistry with Richard E. Grant, who also gives a tremendously endearing and heartbreaking performance at times, is really the heart and soul of the film and helps Lee’s humanity shine through when she’s doing the shadiest of things.

Marielle Heller’s direction and the cinematography from DP Brand Trost help elevate the moody atmosphere of the story and truly convey it beautifully. Heller has a keen eye for detail, and she likes taking time to focus on the actions and emotions of her characters – focusing on seemingly inconsequential things they do and letting scenes play out longer than you’d expect. As Heller also helmed the equally fantastic film The Diary of a Teenage Girl back in 2015, I can’t think of a person who was better suited to both tell Lee’s story and try to understand her in the most intimate way possible. The screenplay by Nicole Holofcener and Jeff Whitty just brilliantly shines through in every moment – throughout the emotional ups and downs of their lives to the more suspenseful moments when they’re on the verge of being caught. Everyone behind the camera truly elevated this material.

While I can’t quite say the film is a masterpiece, I’m struggling to think of any legitimate issues that I had with the film. This is honestly the most perfect telling of this story you could’ve possibly told – completely riveting and emotionally engaging from literally beginning to end. I know it’s a stacked year and I don’t expect this to actually win many awards at the Oscars, but Melissa McCarthy, Richard E. Grant, and possibly a Best Adapted Screenplay nomination would all be well deserved for this wonderful film. Easily one of the best films I’ve seen this year.