Home›Movies›REVIEW — “Beauty and the Beast”
Movies

The tale as old as time has been re-imagined for a whole new generation.

Disney has a long history of repurposing a fairy tale or legend — think Snow White and the Seven Dwarfs, Pinocchio, Cinderella, Peter Pan, The Little Mermaid and Aladdin — and bringing to screen what goes on to become the definitive version of that story.

It should come as no surprise that Disney’s 1991 animated Beauty and the Beast is widely considered by many — if not most — to be the definitive take on the classic “Beauty and the Beast” fairy tale, which, it would be fair to say, is a tune as old as song at this point.

This movie is its own beast: it will please even the most critical of viewers while going on to become the definitive version for a whole new generation of children and moviegoers.   It’s what I love best about this new crop of live-action takes on beloved animated Disney classics: they’re not uninspired, soulless recreations dredged from the Disney vault, given a modern makeover and thrust into theaters as a cash grab. They’re faithful to their predecessors, but they also stand on their own.

It’s not a case of outdoing the original — 2015’s Cinderella and 2016’s The Jungle Book are arguably even better than the animated Disney originals, excuse my blasphemy — because that’s not entirely fair.  Would you really be able to compare King Kong 1933 with King Kong 2005? Instead, it’s more a case of: does the new version live up to the old version?

Disney isn’t remaking creative duds like Home on the Range, they’re tackling their most treasured classics. Classics that are, in a lot of ways, untouchable and unbeatable.   It’s not a competition. I love Beauty and the Beast (1991). And I love the new version, too. As good as it is — and it’s really good — it never stood a chance of somehow outdoing or replacing the movie that I practically wore out on VHS back in the day. Succinctly said, Beauty and the Beast (2017) is a new way to look at an old favorite. Like all the best “remakes,” it complements its predecessor. It doesn’t replace the old model, regardless of whether or not it’s better — for most of you, me included, it’s probably extremely hard, if not impossible, for this new version to supplant the 1991 animated film.

Even for the most open-minded viewers who absolutely cherish the 1991 Beauty and the Beast, the new one, no matter how good it is, just can’t compete with the nostalgia, the experience, the likely twenty plus years time spent together of coming this close to wearing out your Beauty and the Beast VHS or buying Beauty and the Beast on DVD and then buying it again — and then again — on Blu-ray because you love the movie just that much.

The biggest compliment paid towards Beauty and the Beast is that it adapts the animated film and naturally expands upon it without adding filler. It’s not easy to take a great story, Linda Woolverton’s beautifully adapted story, and flesh it out even further and somehow make it even more emotional, even more powerful and even more effecting.

But Disney did it. The best of the new additions include extended, deeper interactions between Belle (Emma Watson) and Beast (Dan Stevens), hitting the same emotional beats as the original while adding in scenes that further develop their already beautiful love story. Beauty and the Beast is, above all else, a love story — and that aspect of the film is wonderfully presented. It’s magic.

Then there’s the newest musical additions by returning original composer Alan Menken and lyricist Tim Rice (The Lion King), including “Our Song Lives On,” “Days in the Sun” and “Evermore.” These songs, new Disney classics in their own right, could easily belong to the 1991 animated original. Hearing the music of Beauty and the Beast come to life — real life — is a treat, and these original compositions make it even better. (Especially in Dolby Atmos).

Other standouts include Dan Stevens’ Beast, an incredibly sympathetic and very complex and very human character, despite his beastly appearance; and Luke Evans’ villainous Gaston, even more dastardly than his animated counterpart. If there’s one criticism I hold towards Beauty and the Beast — and I really only have one, but it’s big — it’s Emma Watson. Unfortunately, the star of the ensemble is its weakest part. She doesn’t make the movie unwatchable — far from it — but she lessens what is otherwise the best of Disney’s modern fairy tales so far.

I couldn’t rid myself of the feeling of insincerity on her part, just as I couldn’t help but feel there was a better — if less famous — actress for the role of Belle.   While the rest of the cast sing so naturally, Watson’s singing voice feels jarringly auto tuned and over processed — robotic, even. The singing of Dan Stevens, Luke Evans, Emma Thompson, Josh Gad and others make you feel like you’re watching a stage production. Watson forces you to realize her voice has been technologically altered, shattering immersion. I don’t mean to dump on Emma Watson, but Belle’s characterization is spot on. Her actress isn’t.

That doesn’t change the fact that the 1991 animated Beauty and the Beast has been faithfully brought to stunning life, making for a live-action fairy tale that’s pure magic. 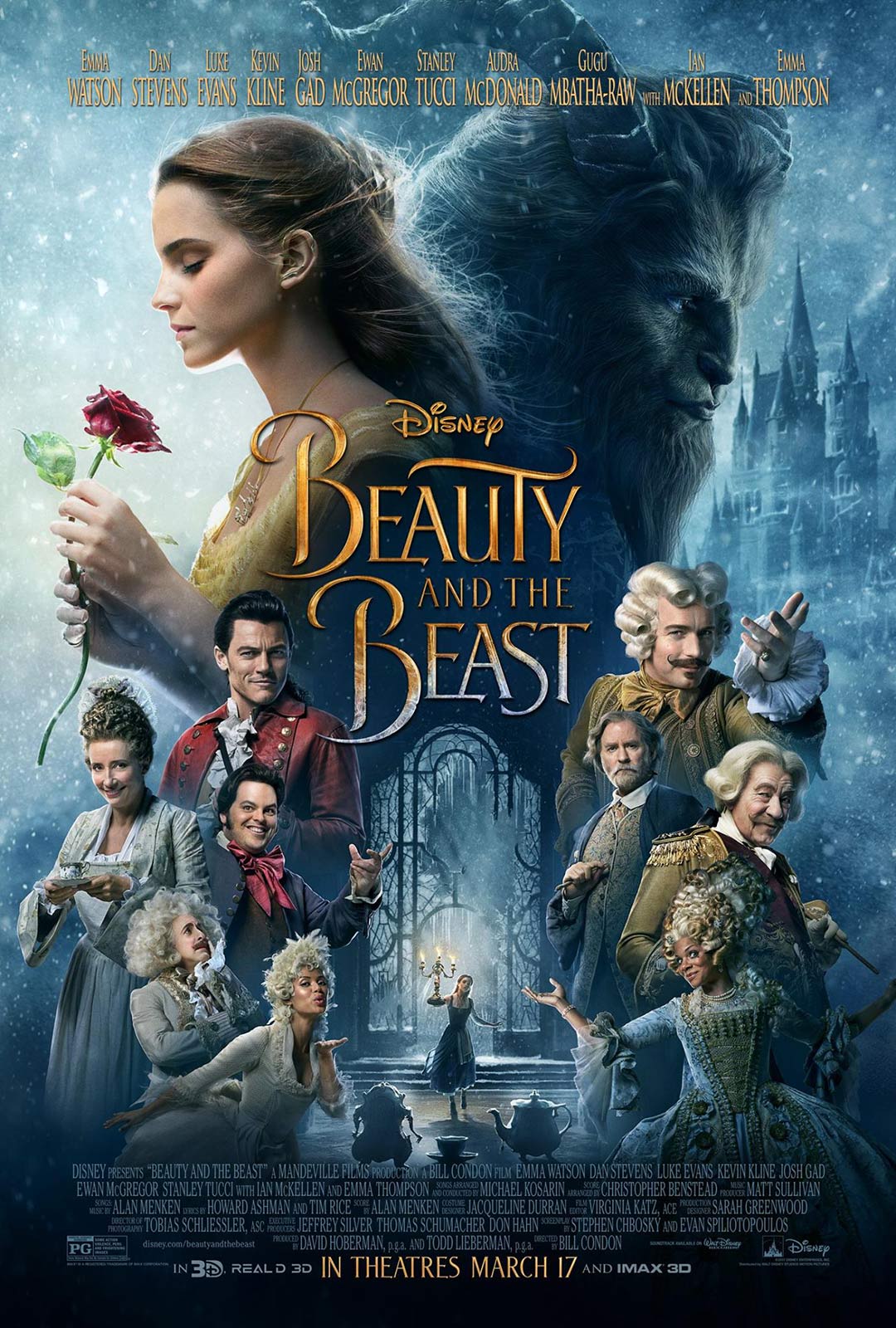 Directed by Bill Condon (Dreamgirls), the film stars Emma Watson as Belle; Dan Stevens as the Beast; Luke Evans as Gaston; Kevin Kline as Maurice; Josh Gad as LeFou; Ewan McGregor as Lumiere, the candelabra; Stanley Tucci as Maestro Cadenza, the harpsichord; Audra McDonald as Madame de Garderobe, the wardrobe; Gugu Mbatha-Raw as Plumette, the feather duster; Hattie Morahan as the enchantress; and Nathan Mack as Chip, the teacup; with Ian McKellen as Cogsworth, the mantel clock; and Emma Thompson as the teapot, Mrs. Potts.