It’s not enough to simply revive an existing property and turn it into a feature-length film anymore. Nowadays, you either have to take something light and turn it dark and gritty or take something really absurd and past its time and make it self-aware of the fact that it shouldn’t be happening in the year of 2017 and attempt to spawn jokes from those cliches alone. Some films have had success with this formula, such as the Jump Street films, but a lot of reboots/revivals tend to fall flat on their face – both commercially and critically. Baywatch should have been a decent exception, considering the admirable cast it has to work with, but it turns out to be one of the worst examples of what both reboots and satires can be. If you want an example of how to use meta humor properly, watch 21 Jump Street. If you want an example of how to use it in all the worst ways, watch Baywatch.

The plot here is almost irrelevant amidst the genitalia gags and constant reminders of how this is based off of a really cheesy television show, but I’ll try to explain it anyways – Mitch Buchannon (Dwayne “The Rock” Johnson) is the head of the Baywatch team, and is devoted to keeping the beach and all of its patrons safe. This falls off the rails once Victoria Leeds (Priyanka Chopra) comes into the picture and drugs and dead bodies appear on shore of Mitch’s jurisdiction. Despite warnings to save this job for the police, he decides to take matters into his own hands. It doesn’t help that the rookie of the team, Matt Brody (Zac Efron), is disobeying all of Mitch’s orders and constantly tries to prove himself. Summer (Alexandra Daddario), CJ (Kelly Rohrbach), Ronnie (Jon Bass), and Stephane (Ilfenesh Hadera) are also along for the blood, drugs, and cleavage filled ride.

Baywatch isn’t a bad film because it’s based off an existing property. It’s also not a bad film because it relies on vulgar humor. It’s also not a bad film strictly because of its self-serious murder mystery plot; It’s a bad film because it attempts to be all of those things at once and it has a major identity crisis. Are you going to see this for the gorgeous stars who have proven to be solid comedic performers in past films? Get ready to see them totally wasted in their roles! Are you excited for appearances from the original cast? Then get ready for the most cringe worthy cameos you’ll ever see! Do you want a genuinely consistent comedy with clever and meta jokes? Get ready to regret that decision after the first ten minutes of them hitting you over the head with that! All of these failures make for Baywatch to be a pretty depressing experience and a very lousy comedy.

The most depressing aspect of this film is that everyone involved genuinely gives committed performances to such bad material. When was the last time you’ve seen Dwayne Johnson not committed to a role? He’s unfortunately giving a great comedic performance here, in a film that is nowhere near deserving of the commitment he’s giving or the chemistry he is spouting with Zac Efron. Nearly every moment they try to go for a big comedic moment falls flat and left my audience fairly silent. Halfway through the film, it’s almost as if the director realized that his comedy wasn’t working, so he decided to make it a straight-up episode of Miami Vice and axed the laughs completely to focus on the mystery. Once again, that would be fine, if that’s what it was set-up to be. This is the worst type of studio comedy, as it is completely reactionary to other meta comedies yet has no idea how to actually be one. It’s an imitation of films that have done this formula much better, yet proves how to completely do it all wrong. 1.5/5.

REVIEW — "Pirates of the Caribbean: Dead Men Tell No Tales" 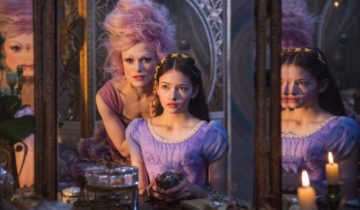