Alice Through The Looking Glass offers dazzling visual effects and a strong performance from Sacha Baron Cohen as Time, but it suffers from a flat protagonist, clichéd sibling rivalry storyline, and tensionless action sequences.

As in Tim Burton’s Alice in Wonderland, the visual effects are dazzling. Producers Tim Burton (Edward Scissorhands, Beetle Juice), Joe Roth (Maleficent, The Huntsman Winter’s War), John G. Scotti (The Rock, The Incredible Hulk), and Jennifer Todd and Suzanne Todd (Memento) integrate a great deal of CGI in an effective manner. This is particularly evident when Alice visits the castle where Time lives. At the beginning of her time in Wonderland, the castle appears terrifying and ominous, which reflects the way that she sees time as a thief and enemy. In contrast, the castle is bright and full of hope at the conclusion of the film, at which point Alice sees time as a gift that everyone should appreciate. Of course, the landscape and creatures in Wonderland are all well-produced and far more captivating than the script and characters are.

The most compelling aspect of Alice Through The Looking Glass is Sacha Baron Cohen’s deliberately cartoonish, silly portrayal of Time. While the screenplay includes nearly every pun possible about time, what makes the character work is Cohen’s sense of self-importance mixed with his own proclivity to fail: this is illustrated in his entrance in which he hits against the walls, even though they are shaped just like him. One of this film’s best scenes involves Mad Hatter (Johnny Depp) and his tea time companions mocking Time because of his name. Cohen and Depp have strong comedic chemistry and timing, which makes this scene more hilarious and memorable than anything else in this blockbuster sequel.

No matter what special effects and talented actors are thrown at audiences, none of them can make up for this film’s protagonist problems. Alice is, despite being the vehicle through which the whole story takes place, bland. Mia Wasikowska’s second portrayal of Alice is less emotive and effective than her first. In all fairness, Linda Woolverton’s screenplay forces her to utter as many cliche/upbeat phrases as possible. To make matters worse, James Bobin (The Muppets, The Muppets Most Wanted) keeps the audience at a distance from her: there is not a single shot in this film that makes the audience feel what Alice feels or care about her on a deeper level.

Alice’s dullness is even more pronounced due to the fact that her character arc is a direct copy of that in the first film. As in Alice in Wonderland (2010), Alice’s mother want her to do something that she does not want to do and she resists greatly before finding the strength to follow her dreams. This time she is a captain who is told that she must choose between keeping her father’s ship, The Wonder, or her mother’s house. With all of this in mind, there is nothing interesting to make her protagonist worth remembering or caring about.

Surprisingly, Woolverton fleshes out the relationship between Iracebeth (The Red Queen) and Mirana (The White Queen) more than in its predecessor, in which both were one-dimensional characters portrayed by talented actresses, Helena Bonham Carter (Cinderella) and Anne Hathaway (The Dark Knight Rises). While trying to make these characters more layered is noble, their origin stories are convoluted. As it turns out, Iracebeth is a victim, a la Maleficent. Even with a subpar origin story for Iracebeth and Mirana, it is disheartening to see Carter and Hathaway try to convince audience members that these characters can set aside their differences. Neither actress emotes convincingly and the dialogue for their reconciliation is as cheesy and generic as possible. Thus, the fact that the sibling rivalry storyline is unoriginal and not well-executed prevents this film’s heart from being as effective as it tries to be.

The most perplexing aspects of this blockbuster is the lack of tension during its action sequences. Even with a sizeable budget and excellent producers, director James Bobin’s direction of the action sequences is inept. Given that it was recently confirmed that Bobin will helm MIB 23, which is a cross-over between the 21 Jump Street and Men In Black franchises, this is disheartening: he opts to emphasize the visual spectacle over the dramatic moments and characters.

The action sequences in Alice Through The Looking Glass mostly involve her running from various foes and racing against Time (sometimes literally). Rather than linger over the situations presented or establishing a proper threat to the protagonists, audiences are given a frenzy of visual effects and loud noises. While the visual effects are undeniably aesthetically pleasing, the fact that – prior to the finale – there is no sense of urgency or danger for the protagonist – is a flaw that cripples the effectiveness of the action sequences.

Alice Through The Looking Glass offers dazzling visual effects and an excellent performance from Sacha Baron Cohen, but it suffers from a flat protagonist, clichéd sibling rivalry storyline, and tensionless action sequences.

Rated: PG for fantasy action/peril and some language

"Alice Through The Looking Glass" offers dazzling visual effects and an excellent performance from Sacha Baron Cohen, but it is a bad film due to its flat protagonist, clichéd sibling rivalry storyline, and tensionless action sequences.
2/5

This film benefits from dazzling visual effects and an excellent performance from Sacha Baron Cohen. 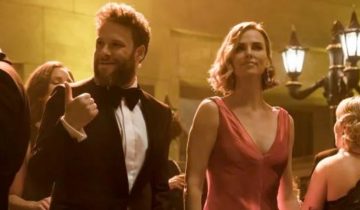