Sweetheart is written and directed by J.D. Dillard and stars Kiersey Clemons, Emory Cohen, and Hanna Mangan Lawrence. It tells the story of Jenn, who has just washed ashore a small tropical island and it doesn’t take her long to realize she’s completely alone. She must spend her days not only surviving the elements, but must also fend off the malevolent force that comes out each night. Sweetheart is modest in its ambitions, and it achieves them, but I’d be lying if I said the path wasn’t rocky.

J.D. Dillard is at the helm here and while there are a few spirited and passionate moments in the film, they’re unfortunately few and far between. Aside from being simple and straightforward in its approach, Dillard lacks any real vision for the film. There is a hint of world-building here and Dillard attempts at it go over well, they’re just very brief. This pitch of it being a female empowerment monster film is a solid one, but that’s lost in its execution. Aside from her being called a sweetheart and her being a woman, nothing really develops the idea further. This is only 80 minutes so it’s a bit difficult to pick holes in it, but it feels as if this was a short that was padded out to a feature. Nothing is particularly bad here, but nothing is particularly good here.

Kiersey Clemons does a fine job as our lead, and while most of the film consists of her either screaming, walking, or hiding, she clearly put a lot of effort into the role. She isn’t given much, but she does what she can with it. While this isn’t the star-making role the film seems to think it is, it’s still a good performance. I did, however, find issue with the performance from Emory Cohen and Hanna Mangan Lawrence. They’re the only other two characters from the film and I almost couldn’t stand them. Their dialogue is painfully on the nose and Emory Cohen in specific has a very difficult time delivering them. Cohen feels as if he’s a comedic parody of a bad guy. He really did take me out of the film at times and really feels as if he’s in a different movie. Kiersey does a good job and the film benefits from having her as the lead because the rest of what we get is not good.

On a technical level, Sweetheart is fine. The cinematography is nice and Dillard is able to capture a lot of great scenery. There is a particularly great moment where the monster is the first scene that showed a great bit of potential and craft in the film. While that’s really the only moment that stands out as really well done, it’s a great moment none the less. The design for the creature was well done and everything about the way he moved and sounded was well done. He doesn’t look stupid when we finally get a good look at him and Dillard does a good job building up to that moment.  Overall, Sweetheart is passable in its execution.

In short, Sweetheart is an inoffensive film, even if it’s a forgettable one. 2/5 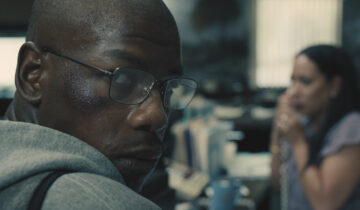