After the entertaining, yet redundant, Into Darkness, the rebooted Star Trek franchise rights the starship with the reinvigorating sci-fi adventure, Star Trek Beyond.

I was fortunate enough to attend a marathon screening of all three films of the rebooted Star Trek franchise starting with the crowd-pleasing Star Trek, followed by the misguided Wrath of Khan remake Star Trek Into Darkness, and leading into the course-correcting Star Trek Beyond.

We last left the crew of the USS Enterprise as they set off on their five year voyage into deep space – a once exciting adventure that has turned into an episodic task for Captain James Tiberius Kirk (Chris Pine) as the monotony of vast space exploration blurs each day into the next.

Desperate for shore leave the Enterprise docks at the elaborate Yorktown Starbase – a gravity-controlled interstellar city that scene-stealer Dr. “Bones” McCoy (Karl Urban) describes as a “snow globe in space” – and as soon as they arrive, they receive a distress call for assistance at a nearby unstable nebula. From here the film jumps right into the action as the crew is ambushed and forced to abandon ship. That’s right, for the third time in as many films, the Enterprise is blasted into Swiss cheese.

Their attackers – led by the ruthless Krall (Idris Elba) – form an impenetrable swarm of single-manned ships that quickly tear the Enterprise apart resulting in a devastating amount of collateral damage. At this point, if you’re aboard the Enterprise and you’re not one of the core seven crew members, you may as well be wearing a red shirt because your days are numbered.

The surviving crew is then scattered in pairs across an uncharted planet making for great comedic partnerships between Spock (Zachary Quinto) and Bones (Urban), Kirk (Pine) and Chekov (Anton Yelchin), and Scotty (Simon Pegg) and newcomer Jaylah (Sofia Boutella) – a local warrior who helps them in their quest to rescue Uhura (Zoe Saldana), Sulu (John Cho) and the rest of the captured crew.

Director Justin Lin (Fast and Furious Franchise) delivers an exciting installment with dynamic action set-pieces that challenge the laws of physics and suspend disbelief much like his other (more furious) films. However, the result feels less like a Star Trek film and more like an action-packed extended Trek episode – which is not necessarily a bad thing.

With Beyond, this rebooted Star Trek series is finally fulfilling its promise of exploring strange, new worlds and seeking out new life and new civilizations while also solidifying character bonds. There are definitely amazing moments that’ll have crowds cheering, most notably the film’s use of The Beastie Boys’ “Sabotage.” The series also continues to pay respect to the original actors who first brought the Enterprise crew to life.

As the connective tissue between the rebooted films and the original series, Leonard Nimoy greatly aided in passing the torch to the new cast as “Spock Prime.” His death shortly before production began was devastating to the Star Trek universe, but would not be the only loss the franchise would suffer. Actor Anton Yelchin – who admirably portrayed likable, young Pavel Chekov – tragically lost his life a few short weeks before the cast launched into their press tour. His passing creates a bittersweet viewing experience that admittedly takes a few scenes to shake.

The trilogy marathon experience was similar to binge watching an addicting Netflix series. Spending so many consecutive hours with these characters built a stronger connection and allowed me to notice jokes and references that I had once missed. By watching all three films back-to-back-to-back, however; it’s hard not to notice the sequels’ shortcomings when compared to the outstanding first entry. I recall leaving the theater feeling less than satisfied after having first watched Star Trek Into Darkness and, unfortunately, I find myself experiencing slight déjà vu with Beyond.

While both sequels are quite entertaining, each film suffers from the same clichéd, third-act destructiveness and under-developed villain that plagues all current Hollywood blockbusters. What started off as a very promising otherworldly adventure, ended with a chaotic spectacle and a brief stand-off that carries as little dramatic weight as Spock screaming, “Khan!” For once I’d like to see the Enterprise crew deal with a more scaled-back, intimate threat instead of having to once again save all of civilization.

Star Trek Beyond’s originality points give it a slight edge over Into Darkness, but both films left me looking forward to the next chapter in the series. The recent announcement of Chris Hemsworth’s return to the series as Kirk’s father, George, will hopefully make the fourth film as wholly satisfying as the series’ initial offering.

The original plot, action and world building of Star Trek Beyond coupled with the exciting plans for the next installment all but ensure that Star Trek will live a long and prosperous life for many years to come… as long as it continues to boldly go where no Trek film has gone before. 4/5 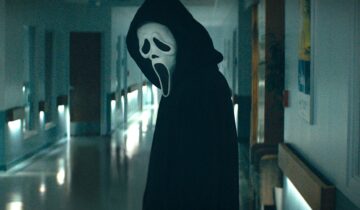