Here’s the synopsis (thanks to Rotoscopers for providing it):

The film stars Bugs Bunny as a New York City cabbie who picks up Lola Bunny after she loses her job as a perfume salesgirl. But Bugs has no idea what he’s about to get himself into! Lola dreams of being a professional perfumer and wants to create the world’s most beautiful fragrance to sell to the House of Moufette in Paris. In one of her many attempts to create this amazing new fragrance, Lola accidentally invented an invisibility spray. Now, she is now on the run from government officials; her greedy boss, Giovanni; and even Yosemite Sam, all of whom want Lola’s invisibility spray.
Looney Tunes Rabbits Run sees Bugs and Lola on a globetrotting adventure from New York to Paris, trying to thwart the many in hot pursuit of Lola’s accidental creation. The movie features a wide variety of fan favorite Looney characters including Speedy Gonzales, Elmer Fudd, Daffy Duck, Pepe Le Pew, Foghorn Leghorn, and many more.

I’ve always been a huge fan of the Looney Tunes. I still find many of the classic episodes to hold up. While this new movie has the nostalgia factor, I can say that most of it didn’t work for me. However, it did work for my two daughters, ages 4 and 6. They thought it was wonderful, which made me happy.

Looney Tunes: Rabbits Run has been released today on DVD and you can rent it on any of the big VOD platforms.

GIVEAWAY — "The End of the Tour" Autographed Prize Pack 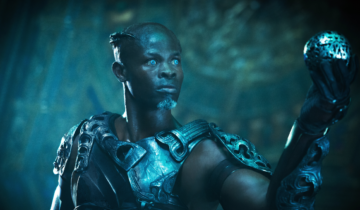 INTERVIEW — Djimon Hounsou on Marvel’s “Guardians of the Galaxy”