31 years after the beloved book was published by Stephen King and 27 years after the nostalgic television film was released with Tim Curry giving an iconic performance as Pennywise the Dancing Clown, Andy Muschietti’s 2017 revival of the beloved It has proven that the clamoring for a proper adaptation has never been more urgent. The trailer took the internet by storm, and the film has been claimed to be one of the most anticipated films of the fall ever since. With the lackluster box office receipts for this past Summer and an overall string of disappointments – does It live up to the hype? Thankfully, the answer is a resounding yes, as it surpassed nearly all of the expectations that I had for the film when walking in.

I guess I’m just accustomed to most Stephen King adaptations doing a poor job at translating the tone and characters over to the feature film format. While this isn’t my favorite adaptation of a King novel, it just might be the one that most successfully captures the feel of one on the big screen without losing what makes it feel so special. This is nearly 140 minutes long and never feels unnecessary or overlong. I was incredibly impressed by how expertly director Andy Muschietti balances the stories for all of these characters and makes an endearing coming of age story – all the while focusing on the horrors of Pennywise and the paranoia that is lying within their town. Maybe more than any other film I’ve seen in a while, It does one of the best jobs at balancing several different tones that I’ve seen in a while. It bounces from hilarious to scary to sweet in such a natural way.

While the tones are all balanced and the film is well directed, I have to say that I’m not sure if this film would’ve worked as well as it did without having such a great ensemble cast together. The kids who portray the Loser Club in this film all have brilliant chemistry with one another and their charisma is what makes the film so entertaining and engaging to watch. I was impressed by all of the kids in the film and how mature of performances they gave, but the standouts for me were easily Jaeden Lieberher as the leader Bill, Sophia Lillis as Beverly, and Finn Wolfhard as Richie, who had nearly all the best laughs in the film. However, the biggest question mark has been the casting of Pennywise. While I could’ve gone for a bit more screen time from him, I thought Bill Skarsgård did a fantastic job at making his own interpretation of Pennywise and making him an originally frightening presence that balanced the humor and scares perfectly.

Any issues that I have with the film are mostly minor, like a few awkward King-isms that don’t translate naturally with people speaking the dialogue or that the editing does feel a bit scattered as it tries to balance so many different characters and plot lines into one film. But none of that overshadows the major accomplishment that It is, and how much of a wickedly entertaining ride it is from beginning to end. Nearly no matter what you’re looking to find in this film, you will more than likely be satisfied with the entire package. There’s genuinely hilarious laughs throughout, a sincere heart at its core, major scares and spooky imagery to cater towards the horror audiences, and most of all – a compelling story about childhood that doesn’t spare any of the most important storytelling elements or character moments for cheap scares. It is a major accomplishment and well worth seeing. 4/5. 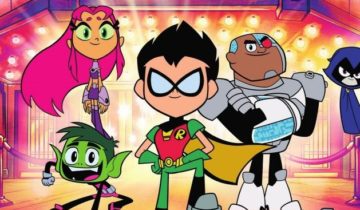