Home›Movies›REVIEW — “Ghost In The Shell”
Movies

Why did we let this happen

Ghost In The Shell is based on the groundbreaking 1995 anime of the same name and is directed by Rupert Sanders, written by Jamie Moss and William Wheeler, and stars Scarlett Johansson, Pilou Asbæk, Takeshi Kitano, Juliette Binoche,  Michael Pitt, and Chin Han. It tells the story set in the near future, where a human saved from a terrible crash, Major, becomes the first of her kind when she is cyber-enhanced to be a perfect soldier devoted to stopping the world’s most dangerous criminals. Now while the controversy surrounding this is hard to ignore, I tried my best to go into this with an open mind and really wanted to love it. Despite its amazing visual style, Ghost In The Shell is an empty and shallow mess with very poor writing, an uninspired story and has nothing making it remotely original or innovating, like the source material it’s based on. As someone who’s not even that big of a fan of the source material, this really let me down.

Rupert Sanders is directing here and while the final product doesn’t reflect that, I can tell he really wanted to do justice to the source material. His first outing as a director, Snow White and the Huntsman, didn’t impress me and unfortunately, he falls into a very rough sophomore slump. He recreates many shots from the original, albeit very briefly. I was very surprised to see that every scene that’s recreated is shockingly short and almost gutted. There is very little action and there are really no impressive sequences. I can’t say whether Sanders does a good job here, as I feel more of the problems stem from the script. I don’t want to blame him, but since he’s the director I kind of have too. I can tell his intentions were noble but I can’t see any fans of the anime being happy with the final product. What a shame. Jamie Moss and William Wheeler penned the script and without being too harsh it is very bad. When the first line of the script says the title you know what you’re in for. I don’t know how the studio didn’t read this script and see it obviously needed a re-write. With the anime being so smart, subtle, and up to interpretation, I was shocked to see everything is squandered. All the dialogue is so on the nose and everything is told to the audience. Nothing is original or even done well. It steals from every other sci-fi movie like it and while the source material is what inspired those films, the source material still to this day has intriguing themes and ideas that have not been explored. Also, if they wanted to explore those themes again, they do a bad job of it. If I had a dollar for every time a character says Ghost, Shell or hack, I would have enough money to pay for a re-write. When people in my audience are laughing at scenes that are supposed to be dramatic, you known something is wrong.

Scarlet Johanson plays Major here and while much has been said about her casting, it wouldn’t have mattered if they had gotten a Japanese actress, NO ONE, can’t make the dialogue sound good. She tries her best to act her way out of this script but again, my audience was laughing at some of her deliveries. I can tell, much like Sanders, she tried her best to do justice to the source materials but falters in her efforts. Other than her, no one really stands out. I can’t tell whether Micheal Pitt does a good or horrible. He sways from being compelling to annoying and at times was reminiscent of Jesse Eisenberg’s rendition of Lex Luthor. I found Juliette Binoche to be particularly bad, but again, the dialogue she’s given is so rough I can’t blame her. No one can make “She’s being hacked!” sound good. Takeshi Kitano does a good job but I didn’t understand why he was the ONLY character who speaks Japanese throughout. While I’m sounding very harsh, the acting is definitely not the worst part. 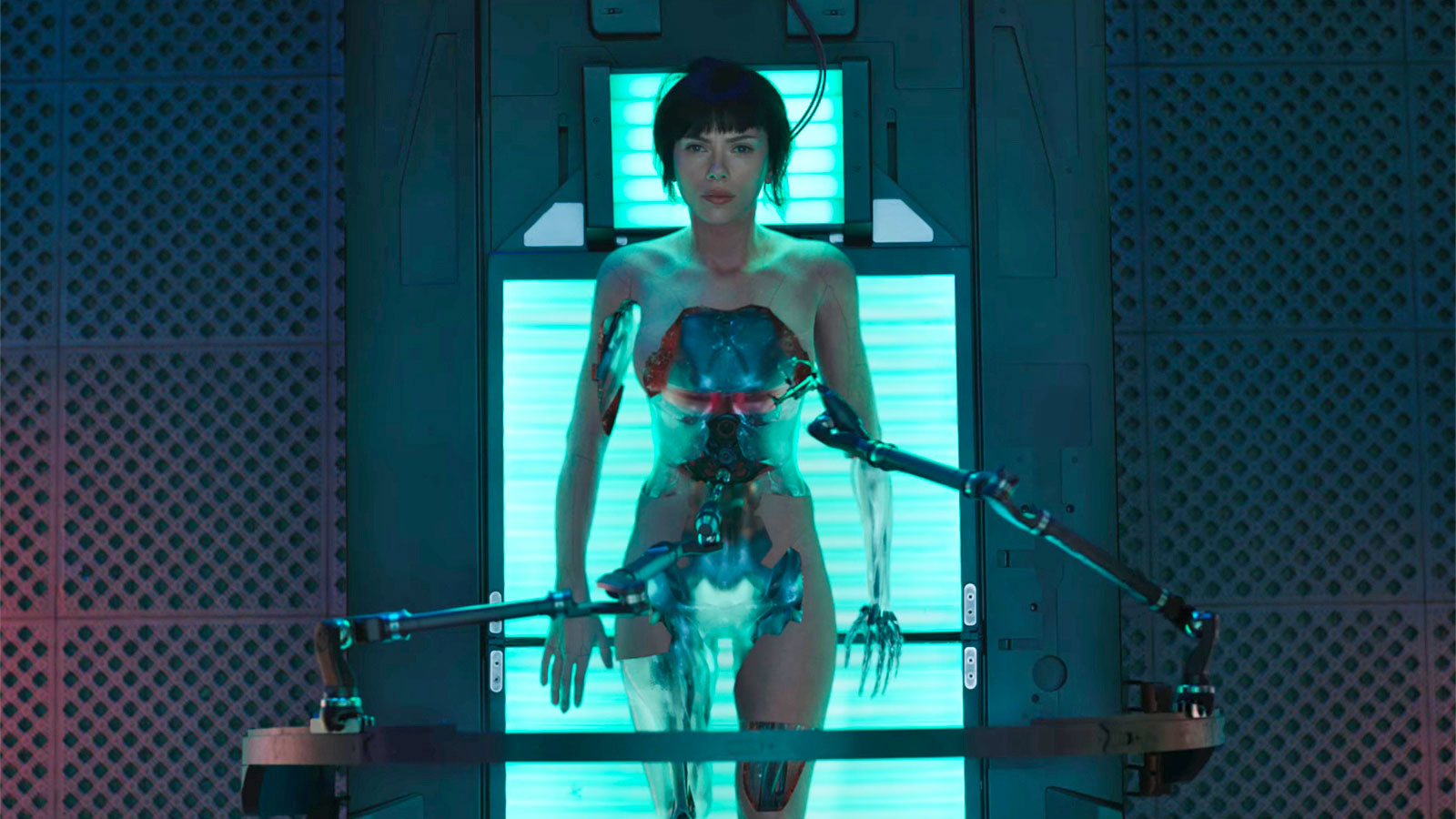 If I were to find a positive in the mess of Ghost In The Shell, it would be the visuals. While I don’t think they’ve re-created the world of the source material, they’ve created something beautiful. While some of the visuals were a bit excessive, a lot of fish swimming in the sky, everything was beautiful. If these effects were surrounded by something better, this would be a rave review. Also, the score by Clint Mansell is great, and he really made some scenes bearable. I can tell people tried to make this the adaptation fans wanted because some aspects of the film are truly great, while others are not. I feel the reason I’m being so harsh on Ghost In The Shell is because I’m upset. There was so much news, hate, and hype surrounding it and frankly, it was all for nothing. Ghost In The Shell is certainly not on the same level as Dragon Ball Evolution or The Last Airbender, but offensively generic, and that’s the worst thing an adaptation can be. This is clearly not the worst thing ever made, it’s not even the worst of the year. But come the end of the month, I won’t remember this, unlike the source material whichh still effects our culture today. Maybe I’m being too harsh on this, but if we keep excepting movies that are passable, we’ll never get anything exceptional.  Are all anime adaptations doomed? Let’s hope not because we have a bunch on the way!

So in short, I was clearly very disappointed with Ghost in the Shell. Maybe with a better script and a better story, this could have been something great. I wasn’t programmed to dance. 1.5/5